My biggest fear starting this blog was that I wouldn’t have time to keep it up. Last week had a lot of music in it but I was too busy working to blog. Likewise, Mahler 7, although not the most difficult, interesting or challenging bass part of the Mahler Symphonies, has a lot of stuff in it worth of attention. The piece is almost an hour and a half after all.

I’ve picked a few interesting tidbits from here and there. By no means and exhaustive list of the difficult passages. I have on the shelf, so to speak, an edition of the complete bass parts to the later Mahler Symphonies I would like to publish with Discordia. So in staying my hand now, I hope that someday when that edition is available, those interested in the rest of the story will buy it.

An exposed passage in the 2nd movement. There is another similar one near the end of the movement. I get obsessed with trying not to use the same finger twice in a row, or to leave any note in a position all by itself, hence the somewhat odd looking penultimate measure. The mordents are the main note, followed by its upper neighbor.

A couple of nifty fingerings from the Scherzo. 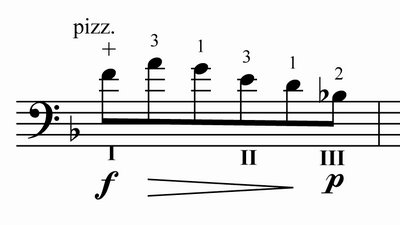 Here is an example of an unfortunate CSO ‘tradition’ – use of ricochet when it really isn’t called for. This is what Mahler wrote, essentially a little bass soli at the same fast tempo:

Here is the bowing:

The ‘throw the bow at the notes and hope for the best’ approach often yields unsatisfactory results. That is to say it usually comes out a jumble rather than together.
Posted by Michael Hovnanian

Thanks Jason! I'm doing my best. I wish I could get the musical examples to look a little better on the page, but I'm still learning how to deal with it.