You see, teamwork will only take you so far. Then the truly evolved person makes that extra grab for personal glory.
Montgomery Burns – The Simpsons, season 7, episode 12: Team Homer (aka the Pin Pals episode)

What makes an orchestra an orchestra? One essential component seems to be that to qualify as such, an orchestra must have more than one type of instrument; another requirement is that it have groups of like instruments playing the same part. Some more concise definitions require that bowed strings make up the grouped instruments sharing parts. Perhaps that is why the designations 'string orchestra' versus 'band' or (if they are trying to fancify it) 'wind ensemble' are used to describe groups made up entirely of strings or winds, respectively. Or maybe the right to the designation acknowledges that the orchestra began as a group of stringed instruments, and it is this core group which continues to give the ensemble its identity. Les Vingt-quatre Violons du Roi, from the time of Louis XIII was, as the name suggests, a group of instruments from viol family with multiple players sharing each of five separate parts. It is this ensemble which is regarded by many as the prototype for the modern orchestra. The members of this fabulous group had the perk of being allowed to carry swords and they held secure positions that were hereditary or could be sold. (Anyone who decries the supposedly coddled state of orchestral musicians as yet another symptom of decay in the modern era should look back about 500 years and reconsider.) The 24 strings, who were better at using their 'indoor voices', were occasionally augmented with wind instruments, customarily used for outdoor performances, playing one to a part and, to quote King Louis, voila!

All musicians of the orchestra collaborate to bring off a performance. True, there are instances of nonconformity, ranging from recalcitrance all the way to willful sabotage (Please, don't ask me to write about that.), but the ethos is overwhelmingly one of cooperation. With between eight and sixteen players sharing a part, the string sections require a different degree of cooperative effort than the winds, brass, and percussion, where each individual bears responsibility for his or her own line. I once participated in a conversation during which a member of a wind section made a disparaging remark about how it seemed that before every performance the stagehands would come and take one or more chairs out of the string sections (meaning a player would be absent – this is something for audience members to lookout for during the warm-ups, by the way), while players at the back (winds, brass, percussion), having more of a sense of responsibility and pride in their jobs, were seldom if ever absent. True enough, but another pair of anecdotes might show this in a different light. Once, with the music director on the podium, we were playing a piece with a major solo part for one of the string principals who became seriously ill mid-week, after one or two performances, if I recall. The newly hired assistant took over on very short notice and performed more than admirably. Another time, a principal of a wind section made the entirely understandable and forgivable error of mixing up a matinee and an evening performance in the schedule. First the concert order was reshuffled, and then the rest of the performance was ultimately delayed by about one hour, awaiting the arrival of the essential yet tardy musician. As the show must go on, in this case I say score one for the strength and flexibility of the collective! It is true that during a performance an audience member might observe a string player dropping out momentarily in order to turn a page, put on a mute, scratch an itch, or whatever, without a significantly noticeable result. But this only underscores the strength of these sections and the adaptability of the players. Like the internet, which can endure catastrophic local failure due to a design where no single node is essential to the survival of the whole, the string sections of an orchestra are strong and flexible because of their built-in redundancy and the players are attuned to working collectively and adjusting to whatever minor variations might occur. This strength emanates from willing self-sacrifice, along with the attendant sublimation of ego, which is the price paid by string players to distribute their responsibility widely among themselves. The countless minor adjustments and compromises that go into playing in a string section are largely unremarked upon in rehearsal and are more or less taken for granted during the applause.

Returning to the post performance acknowledgments, the trend of having more and more individuals, sections, sets and subsets of groups within the orchestra rise for special recognition during the applause seems to be gaining momentum. This trend has also affected other art-forms as well. A New York Times article from a few years back noted the increasing length of film credits, where anyone who so much as brought coffee and donuts to the director now gets a mention. In the concert hall every conductor is now on the lookout for opportunities to distinguish an individual player from the larger group. This is troubling, and not merely as an expression of sour grapes from a string player, but arises from a general uneasiness with the fact that the orchestra, already imagined by many in the public as an autocratic, elitist organization, does little to counteract those negative perceptions by spotlighting individual accomplishment over collaborative effort.

There is a brief section in Thomas Mann's Doctor Faustus which I cannot recall exactly or find again when I thumb impatiently through the book, so it is possible I'm making it up out of whole cloth, but the passage I have in mind is a description of the way Renaissance composers embedded a bit Christian symbolism into their compositions by writing crossed voices in the polyphony to invoke the image of the Holy Cross. These secret symbols communicated to those who could read the score but were not readily discernible to those who merely heard the music. With that passage, whether it really exists or not, in the back of my mind, my thoughts crystallized when I found myself in the music library looking through the score of the Bruckner 9th Symphony in search of a minor discrepancy. What drove me to the library is not now important, probably on the same level as observing that the gargoyle on one side of a Gothic cathedral has six teeth, then traipsing a hundred meters or so in order to discover that its counterpart on the opposite side has but five. Nevertheless, the inconsequential yet nagging question had me seeking out the score in search of an answer. As it was an election year here in the US, I had also been pouring over dozens of electoral maps at the time. Anyone who has done so will have noted the great spatial disparity; vast swaths of sparsely populated territory are held by the Republican (conservative) party while the Democrats (liberals) are clustered in densely populated urban centers. Turning to the Trio section of the second movement, where I knew I would find the answer to my query, the great expanse of empty staves struck me as instantly familiar. What appeared to be a mostly empty page of manuscript actually represented a majority of the players playing! Is it possible that conductors, who (allegedly) spend hour upon hour studying scores, rather than holding animus for the string sections, are responding to this spatial under-representation on the printed page when it comes to post performance acknowledgment? 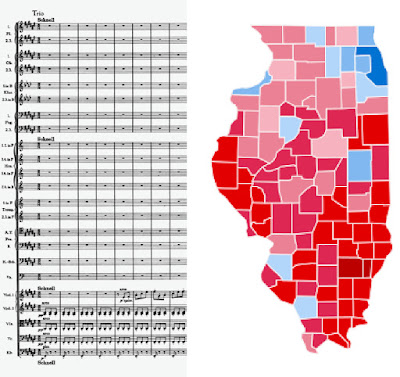 (click to embiggen)
Left: Bruckner 9th symphony, Trio. Two thirds of the orchestra (strings) playing, one third resting.
Right: 2016 presidential election results. Decisive victory for the Democratic (Blue) candidate (+~900,000 votes).
N.B. Use of the state of Illinois is for illustration purposes only. No information about the location of a Large Midwestern City is intended or implied.

Could it simply be that conductors, seeing an image of a grand orchestral score in their mind's eye, convert the disparity on the page into an unequal lavishing of attention? Some conductors certainly appear to follow the formula that everyone who gets a line in the score gets a bow. Obviously, this does not completely explain the treatment of the string sections, who get 4 or 5 lines yet almost always rise as a group. It is possible that with the strings clustered at the bottom of the score, coming last in the order, and with patience and applause thinning out, the maestro is merely wrapping things up in a kind of yada yada yada. Or perhaps the strings have gone the way of a vestigial organ, or the reptilian brain, once upon a time vital to the organism, maybe its defining characteristic even, but now layered over with the fruits of more recent evolution and progress.