Playing Tchaikovsky this week under Andrey Boreyko was generally a positive experience – he’s a nice man with good musical ideas. One thing he said stuck in my mind, enough to make me wan to write about it.

We were rehearsing one of the selections from Sleeping Beauty, the Panorama, I think. Anyhow, the movement in 6/8 has repeated 16th notes in the winds, a melody in quarter notes in the strings, with the basses playing pizzicato on the 1st and 4th 8th notes of the bar. Like this: 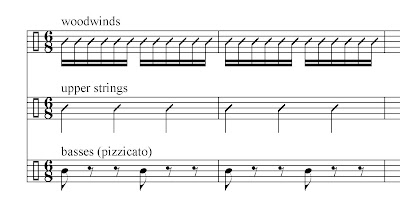 In our section unfortunately this can sometimes be a recipe for disaster. And sure enough, the bass pizzicatos came thudding in early and often. I should point out to students that this is a classic case where it is necessary to follow the moving notes (the 16ths ) and not get sucked in by the melody which might tend to rush or drag against the beat. Most experienced players would have figured out as much by the time they got into an orchestra, at least you would think so.

Boreyko ran parts of the movement several times and then stopped to explain how the theater in which Sleeping Beauty would be premiered had just installed what at the time was a technical marvel: a rotating stage. He went on to say that the Panorama music reflected this development, with the constant 16ths in the winds representing a kind of ‘mechanical’ force driving the music.

Usually orchestral players are resistant to these kinds of extra musical explanations, labeling them as perhaps some sort of relapse into amateurism. “You want that faster or slower?” (or something like that) is often the response when a conductor tries to wax poetic.

Whether Boreyko had the errant bass pizzicatos in mind or not when he made his comments, I have no idea. I think many conductors have given up on us since commenting on something like that often makes it worse rather than fixes the problem. But miracle of miracles, the next time through, the bass pizzicatos were more or less in he right places.