For the next two weeks the CSO will be solely occupied playing ‘Welcome Yule’ concerts. WY is the kitschy, money making Christmas show put on every year. I think it has been going on for 10 or more years now.

In the past, WY concerts were offered as ‘members of’ (meaning: members of the CSO) concerts. ‘Members of’ concerts are extra work for extra pay and are strictly optional. In years past, the CSO would continue to play ‘regular concerts’ (i.e. classical symphonic music) while the WY shows were going on. CSO players could opt to have a very busy schedule right before the holiday break and earn a little extra money. Those of us not wishing to indulge in that crass form of entertainment could simply say no. The difference this year is that WY is now part of the regular schedule. Participation by CSO musicians is not optional, and of course there is no extra payment. Also, for the next two weeks there are no more regular orchestra concerts by the CSO. Classical music has left Orchestra Hall (or Symphony Center as it is now called), replaced by Xmas music.

The plus side for me is that WY uses a smaller orchestra – only four basses – so I don’t have to do it. In fact, not playing WY means I don’t have any CSO work until January 9, 2007. The CSO has traditionally not given concerts during a two weeks span from around Christmas until after the New Year.

While it may seem ridiculous for me – looking at a month paid vacation – to criticize the situation, I can’t help but feel depressed seeing the once proud CSO reduced to playing gaudy Christmas music.

Without mentioning names, some of the arrangements are truly awful. I played WY during one of the first years. Sitting next to my good friend and colleague Rob Kassinger, we were rehearsing a leaden arrangement of Frosty the Snowman that had the basses slogging along with almost every note below the ‘E’ string. I caught Rob’s eye and we both burst out laughing. It has been an ongoing joke since then – the elephantine Frosty lumbering along like some demented holiday Godzilla.

I understand that the organization needs to make money, but in my opinion WY goes too far. There is plenty of wonderful classical music appropriate for this time of year. That is what a great orchestra should be playing.
Posted by Michael Hovnanian 13 comments:

Gunnelpumpers at the Muse Cafe

For the next two weeks the CSO is playing Welcome Yule Xmas concerts. Mercifully, I am off of that, so here is my less than busy schedule.

Wednesday - Sunday
off!
Posted by Michael Hovnanian No comments:

Sermon on the Mount

After hearing about them for quite a while, I finally got a look at the famous Max Dimoff warm-ups – I’ve also seen them referred to as the Cleveland warm-ups – an interesting collection of this that and the other. My eye went immediately to the Simandl Gradus ad Parnassum excerpts (Gradus ad Parnassum is Latin for ‘Steps to Mount Parnassus’, or some such thing) due to their similarity to some passages in the Bruckner sixth symphony I had recently been working on.

The passage from Gradus begins

Below the section is the admonition to ‘keep 4th firmly on the string throughout…’ I assume this means the 4th finger – whether this comes from Simandl or not I don’t know, having never studied Gradus. 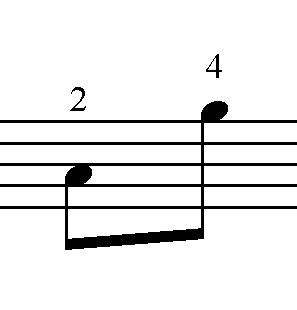 This also created a kind of horizontal position

So far so good, but the next passages looked like this

Assuming no open strings – since the exercise modulates through all twelve keys – I’m wracking my brain trying to figure out how to keep the 4th finger down throughout. Anyone in possession of how to do this will receive rich rewards (or at least praise) if they email me a solution.

Having wasted many good hours trying to devise good fingerings for the similar Bruckner passages, I felt it might be fruitful to concoct my own exercise and see what would result. I began in a key that made open strings out of the question and came up with

In descending, I noticed that shifting to the 4th finger produced better results than shifting to 3.

After practicing various ways to do this, I end up gravitating toward the familiar. Still, there is always something to be gained by trying a new approach, many ways to climb a mountain, even when it is a mole-hill.
Posted by Michael Hovnanian No comments:

Bartók The Miraculous Mandarin
(Beyond the Score)

Schedule for the week

Monday
Travel to Chicago
Posted by Michael Hovnanian No comments: