Last week, February 12 – 18, the CSO went on tour to Florida. As the weather in Chicago turned out it was a great time to be gone. The orchestra took two programs on tour.


Since my involvement in the tour was minimal, anyone interested in what a fabulous experience the whole thing turned out to be can visit the CSO website Florida Tour page to see the schedule and a photo journal.

About a month ago, word came down from on high that David Zinman had decided to use reduced strings (6 basses) for the Gollijov, Elgar and Schumann. Looking at the tour schedule, somebody noticed that the entire tour could be done with 6 basses except for Zarathustra which was only on one concert. To save some money, players were to be excluded from the tour or sent home after the Miami concert. Naturally there was much gnashing of teeth and wringing of hands. Nobody wanted to miss out on a week in Florida. Once all that died down, the negotiations began, ending with two of us graciously (if I may say so) accepting the tour concerts off for some minor considerations. So my duties were limited to one half of one concert – less really, since the second ‘half’ didn’t begin until about 9:40, ending at 10:15. After that, I went off and had my own private tour of Florida.

Fortunately, the one concert I played was at the Carnival Center in Miami, a beautiful and much talked about new concert hall. Architecturally, the place didn’t disappoint except possibly for the lack of backstage restrooms. The sound on the other hand left some things to be desired. My perspective was from the stage only, where I found it hard to hear the bass section or much of any low-end. Colleagues in the audience at the rehearsal confirmed the lack of bass response. The acoustic was clear, if a little dry. I heard a few woodwind parts in the Strauss I had never noticed before and when the conductor spoke from the podium at the rehearsal, unlike at Orchestra Hall, I could actually make out the individual words he was saying. There were some other complaints about the sound being ‘pale’ or ‘flat’ which I could agree with.

Another complaint was with the risers. It is almost a guarantee that they won’t be deep enough which was true again at this hall. The lack of bass sound might have had something to do with the construction of the risers. One of my colleagues who is very interested in such things had a look underneath and said the supports were aluminum and rather flimsy. There is a big debate in the orchestra as a whole and in the bass section about risers. While there are some benefits to having the bass section elevated, some sound gets absorbed by the risers. The best results seem to come when the firmness of the risers approaches that of the floor.

To top that off, the concert hall management asked that the cellos and basses not put endpins into the stage floor. It must be painful to see a brand new wood floor get endpin holes in it, but that’s what stages are for. One of my colleagues remarked that trying to keep a stage floor pristine was like ‘eating without getting your mouth dirty.’ I remember something like this once before on a tour. Manchester or Birmingham, whichever had a new hall when we played there, provided those wooden ‘T’ shaped boards, designed mainly for cellist I think, since they were way too thin and impossible to use with our bass stools. Anyhow, the Carnival Center had nothing of the sort. Instead, our stagehands had brought along these silly little black squares of ¼ inch plywood – looking for all the world like mortarboards, minus the tassel. Of course as soon as an endpin went into one of those, it slipped so a stagehand would have to tape it to the floor with a concert-black duct tape. The problem with this was that when somebody wanted to move more than a couple inches, the thing had to be ripped up and re-taped. Rebellion against the silly squares grew until they were being audibly ripped up and tossed aside during the rehearsal.

The high point of my one-day ‘tour’ had to be visiting the New World Symphony in Miami Beach and listening to a number of very fine young bass players. I enjoyed seeing a couple of former students. One of them, Matt Heller, is featured prominently in a New York Times article in the February 18 Sunday Arts section.
Posted by Michael Hovnanian No comments:

The concert Thursday evening was a little more than half full, an optimistic way of saying it was almost half empty. There is something to worry about when a concert with both Johann and Richard Strauss sells so few tickets. The temperature in Chicago that night was about 6 degrees, which may have had something to do with it. On Saturday the turnout was somewhat better – maybe two thirds full.

The program of Strauss, Ligeti, Strauss was almost your classic shit sandwich. (My apologies for the language – s.s. from now on.) For those unfamiliar with the lingo, s.s. refers to a distasteful modern piece served up between two more palatable audience favorites. The classic construction is an overture or concerto, followed by the modern piece, ending with a beloved symphony or tone poem. The s.s. may also come open-faced, where the modern piece is first, or upside down where it is last. But the savvy reactionary audience member easily foils these schemes by arriving late or leaving early.

My definition of the terminology shouldn’t be taken as acceptance of the underlying narrow-mindedness. There is a tiny minority of us in the orchestra – I can think of two others who would dare express their views openly – who like 20th (and even 21st) century music and think we ought to play more of it. At some point, the audience has to be led kicking and screaming out of the 19th century, hopefully some time before the 21st century ends. After this week I wonder if 93 years might not be long enough for the task.

On the other hand, the Friday night concert – Film Night – was well attended. For a change the concert was entirely classical music – Mendelssohn Italian Symphony, Bizet Carmen, Rossini William Tell, etc. etc – so those hardy souls who braved the cold to come to Film Night at least got to hear something like what we normally play.

All in all, considering the amount of time I spent practicing Zarathustra (or should have), not the best of weeks.
Posted by Michael Hovnanian 1 comment:

The Ars Viva program had a few unfamiliar works on it – the Diamond and the Schuman, although during the first rehearsal, when we got to the slow movement of the Schuman I realized I had played it before – at the 1975 Congress of Strings in Seattle. Why the slow movement triggered such a distant memory, I have no idea.

Anyhow, between the Diamond, Schumann and Bartok it was the kind of concert where every piece is faster, more aggressive and thornier than the one before. The Diamond was mostly counting. Here are a couple passages from the Schuman. 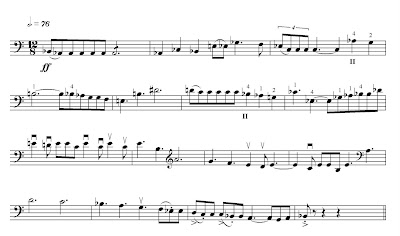 The Bartok is better known, I think. This passage always gets me

The above passage got a bit frantic at the concerts. By the time the basses entered the tempo heading off the scale – probably around 120 to the dotted quarter note, way too fast!
Posted by Michael Hovnanian No comments:

Yes, the Ars Viva concert was during the Super Bowl. That combined with the fact that the temperature was about zero at concert time whittled the audience down to a hundred hearty souls or less. Monday was a bit better, but if anything it was even colder so the mostly aged audience stayed away. The all 20th century program didn’t help either, I’m guessing. To top matters off, when I opened my case for the Monday concert, I discovered a big ugly crack on the top of my bass.
Posted by Michael Hovnanian No comments:

Max Dimoff sent an interesting reply to the 12/7 post concerning something included in his warm-ups. I will post this now (with Max’s permission) because I’ve been under the weather recently. Besides, I have this week off from the CSO.

Anyway, I felt compelled to explain the fingering the way I play it (and collect my reward!). The footnote is actually from Simandl. I do not take that too literally though. My fourth finger is always over the string and but at best mostly firm on the string. I release the fourth finger, although still keeping it over the note, when playing the third and sixth degrees of the scales. I do this because I prefer to avoid true extensions whenever possible. As for the second degree I do use the third finger. In warming up this morning I was thinking about your questions and analyzing my motions. The way I keep the fourth finger down is by sort of rolling to the outside of the pad and collapsing the first joint. The second joint on the fourth finger is therefore at a rather high angle. The third finger collapses at the second joint when reaching across the string unless I raise my elbow.

I know this is a rather distorted position but that is how I do it. It always comes immediately back to a good fundamental position. For the purposes of a warm-up this really works the abductor digiti minimi in the left hand. (The big muscle extending from the fourth finger). It also promotes a certain flexibility in my hand position which I feel is essential.

I hope this clears things up a bit.
Posted by Michael Hovnanian No comments: