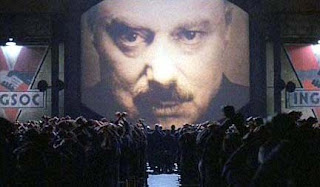 An odd side note: the individual who relayed the ‘complaints’ to me has had a prominent banner advertisement running on a web site that easily gets a hundred times as many hits as mine for several months featuring his name as well as the name of the orchestra we both play in. I’m scratching my head over that, and a few other things as well. I suppose, like Winston Smith, the only thing to do is uncork another bottle of Victory Gin.
Posted by Michael Hovnanian 9 comments:

Since I have some time off, I thought it might be a good time to delve into the large backlog of questions readers have submitted.


I recently discovered your blog and enjoy learning from you about the life of an orchestral musician. I have a couple of questions that you might consider for your blog.

1. The ability of musicians like you to pick up and learn so much music so fast astounds me. How do you do it? Or is this ability a gift that you either have or don't have?

2. Surely you can't like all of the works that you play. I suspect that you probably even have come to hate a few works in the standard repertory. Or find yourself loathing new works that you're playing for the first time. How do you make learning and performing these pieces palatable? Or at least bearable? (Of course, besides being paid to do so.)

1) Any player can learn to pick up new material more quickly. Some are better at it naturally than others. That said, we don’t play something new every week. A very cursory scan of the season schedule for this year shows the CSO playing about 100 different pieces, not including pops or film night concerts. Of those I could only find about 20 I have not yet played.

2) Your parenthetic qualifier removes the easy answer to this question from consideration.

While many colleagues might express loathing or hatred of new works (and by this I mean anything previously unknown to them), my own view is, like with fine cuisine, feelings need to simmer for quite some time in order to obtain the necessary depth and complexity, so I reserve loathing and hatred for things I know very well. Certainly a previously unknown piece of music may immediately produce feelings of displeasure, discomfort, or in extreme cases, disgust, but the refined musician learns to mute the visceral reactions in favor of a more measured response. To find something despicable for intellectual reasons is, in the long run, much more satisfying.

Some have concluded because performers onstage might harbor secret feelings of negativity towards what they are playing this makes musicians comparable to practitioners of the ‘world’s oldest profession’. But in my experience I find myself surrounded by individuals who have an incredible amount of pride in what they do and a high degree of professional integrity. I take it as a personal challenge to make certain that I try to play pieces I do not like as well as I possibly can. In the case of certain modern works, there is almost a perverse pleasure in it, i.e. “If this is really what you want me to play, here it is!”
Posted by Michael Hovnanian No comments:

Time off, the other side of the story

One of the saddest, most depressing parts of our recent contract negotiations had to be reading the many musician comments about injuries and physical problems experienced due to overwork. As a way of saving money, the orchestra was reduced in size by attrition during the last two contracts. String sections (except the bass section – we’re all clinging to our jobs for dear life) lost the most work relief when retiring players were not replaced. The alarming connection between increased workload and the amount of injuries reported helped bring the work relief issue to the forefront.

The last post poked fun at the Byzantine ways time off is defined and parceled out to musicians. Some of the arcane provisions in the contract are products of evolution, as it is easier in the course of negotiations to tack on new clauses, sections, and subsections to existing language rather than cleaning the slate and agreeing to simple, concise terms. Of course, both sides of the negotiating table have their own reasons for keeping the contract language opaque. The chimerical ‘release week’ seems to be one of those evolutionary oddities, hidden in plain sight for various reasons. But hopefully now that the issue is emerging from the shadows everyone can admit time off is no laughing matter.
Posted by Michael Hovnanian 3 comments:

Every Dog Has His Day

It is never too early in a season to start thinking about time off, although as I mentioned here once before it is often best to hold vacation weeks in abeyance until the dog days of the season. Since I seem to have hit my own personal dog days a little early this year it is probably for the best that I find myself faced with the next three weeks off.

Possibly to someone in a different profession three weeks off sounds exactly like what it is, but in my world time off comes in various ‘flavors’. So what I am enjoying now is a sort of three-scoop ice cream cone of work relief, with each scoop more delicious than the last.

I’m certain an explanation is in order.

This week (November, 5 – 11) I am rotated off the program. Technically, I am on call. Should a colleague fall ill or be otherwise discomfited I could be called into action at any moment. Of course, the likelihood of this happening decreases as the week and the rehearsals for the concert go on. Lest anyone think I am waiting to jump into action, a freshly rosined bow leaning by the front door, the car engine idling, I confess the strategy for a week like this is to studiously avoid answering the telephone for the first few days, make an offering for the continued health of my colleagues, and continue on about my business.

Next week is a split orchestra week. There are actually two kinds of split orchestra weeks, but I will defer explanation of the differences. To continue the ice cream flavor analogy, one is like coffee, the other, cappuccino. Split orchestra weeks happen when we play repertoire requiring a small orchestra. There are two weeks a year of the type happening next week and players are required to play one of them and receive the other as guaranteed time off. But that isn’t the end of the story. Often, the programs on a split week require less than half of the orchestra. When this is the case, players assigned to the split week may be rotated off. So it is possible for two players to be off the same week, one on call, the other not. I think I am not on call next week, but I have to check.

The following week, the week of Thanksgiving, is one of my released weeks. Released weeks are the chimera of time off in the orchestra. Even the term is elusive; is it released week, or release week? I’ve heard both. The confusion reminds me of the term in football describing that odd little pass quarterbacks throw, sometimes out of desperation, sometimes mischievously; the shuffle pass, or is it the shovel pass? Everybody knows what it is, but what is it? Scour the contract for a section dealing with ‘Released Weeks’ or ‘Release Weeks’ and you may come up empty. And yet, every new player comes into the CSO knowing they get two ‘release weeks’ off every year. It’s one of the first things you learn about after being shown your locker, the stage, and the restrooms.

The short definition of a released week is seven days off, not on call. String players choose weeks by lottery before the start of every season while winds and percussion are constrained by repertoire and other considerations. These weeks are valuable because they are flexible (to a point) and guaranteed; a player might take an out of town engagement, plan family activities, or whatever, with the secure knowledge they will not be called back.

So, what does a player do with their time off? Answers to that are the subject for another post.
Posted by Michael Hovnanian No comments: