Goodbye to all that.


As mentioned, the hall in Moscow turned out to be a wonderful place to play after all the tripping and slipping on the stairs. St Petersburg also had a magnificent concert hall, although I might not have been in the best spot on the stage to appreciate the acoustics. The earplugs were pushed in so far one of them didn't come out until I sneezed the next morning, if you know what I mean.

As with almost every tour, the public transit infrastructure in Russia made what we have back home look pretty shabby. I imagine if more Americans traveled overseas they might approve increased funding for transportation if only to avoid shame and embarrassment.

However, the St Petersburg airport needs works, and lots of it. One of my colleagues who dropped off his partner earlier in the day warned of a possible cluster-f#ck when our large group arrived. Sure enough, as our buses pulled up the line was already out the door, although that line turned out only to be a sort of preliminary line - a line to get in line. The real bottleneck occurred at passport control. If you imagine the human digestive tract, with however many yards of intestine crammed into the abdominal cavity, you will get an idea of how that line snaked around the all-too-small room. At every bend, a few enterprising, boorish, or clueless people took the opportunity to jump a loop or two ahead. Like any orchestra, we have a deep well of bitchiness and personal outrage to draw upon, but no appeal proved effective at getting the cutters to move back to their place. By my watch, it took about four hours of standing in line to make it through passport control and onto my flight.
Posted by Michael Hovnanian No comments:

Mind the Steps of Central Asia!


One of the problems with touring is that eventually the hilarity stops and you have start rehearsing and playing concerts. The Great Hall of the Moscow Conservatory is a wonderful auditorium, provided you can make it to the stage uninjured. The place has some infrastructure shortcomings, not the least of which were the slippery, unevenly spaced stone stairs backstage - I saw two players trip and fall there. But all was forgiven once I took my seat on stage and glanced up at the striking composer portraits. From on high, an illustrious collection of composers kept the on-stage proceedings under stern surveillance. Directly in my field of vision when I looked towards the podium (which is to say, several times) an inscrutable Tchaikovsky appeared to have his gaze fixed on something in the back row of the orchestra.

As these concerts were some kind of important cultural-political event with the future of Russian-American relations hinging on how well we played, it was only natural the first thing the audience heard were a number of speeches, nearly half an hour of them, truth be told. It may not be well known that, as a rule, musicians (at least this one) detest sitting through pre-concert introductions, welcomes, remarks, presentations, award ceremonies, lectures, explications, words of thanks, praise, sympathy, excuses (so-and-so is not feeling well but has decided to sing anyhow), the unfurling of flags or banners of any type, the viewing of portraits, photographs or sculpture, the bestowal of medals, plaques or trophies, announcements concerning future or past concerts, mention of recordings and other merchandise, reminders about receptions, parties, or vehicles with headlights left on, the wheeling on stage of a giant cake and the singing of 'happy birthday' (I'm looking at you, Costa Mesa!) religious incantations, prayers or evangelizing of any sort, to name but a few of the things I've endured over the years.

Inclusion of the Smirnov was, according to rumor, something of a political move which made his absence at these concerts all the more puzzling since he had managed to make the trip over to the USA for our concerts. I hope he is feeling OK. At 7 minutes, the evocatively titled Space Odyssey might might be the shortest work to cash in on an association with the ancient Greek wanderer. The program notes back home (sorry, I didn't read the ones in Russian) made no reference to Kubrick, Also sprach Zarathustra or the year 2001.
Posted by Michael Hovnanian 1 comment: 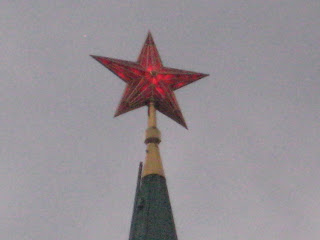 Red Sauce over Moscow
(Sorry for another fast-food themed post - my last on this trip, I hope)
The first evening left time for little more than a quick jaunt over to Red Square before dark. I wanted to see if the Kremlin had been Disney-ified yet or not. The folks selling matryoshka dolls and other trinkets were at the Kremlin walls but had not breached the perimeter. Red square looked much as it had before, although now crowded with ice-cream cone eating lollygags and (religious?) fanatics screaming through bullhorns it had lost some of its solemnity. Lenin still lies in his tomb, the body of amazing 'peasant-under-glace' apparently immune to the passage of time. My wife will be glad to know they still deny access to anyone with a camera.
With darkness closing in fast, I hurried over to the eternal flame, memorial to the soldiers who died in the Great Patriotic War (aka WW II to us in the west), a moving, human-scaled remembrance, much more effective than the bloated, at once kitschy and sterile monstrosity of the Museum of the Great Patriotic War and Victory Park I was to visit the following day. As the light had failed utterly, I turned to head back to the hotel, whereupon I noticed a structure that had not drawn my attention earlier in my rush to get to the center of the old 'Evil Empire'. The low-slung building seemed to be the top level of some larger underground structure that looked suspiciously like a shopping mall. The businesses visible at street level were (of course) McDonald's, with its royalist sidekick the Burger King tagging along just around the corner, and then another nod to the patriarchy, Sushi King, which I think is a local place, and finally, the ultimate kick in the throat to any dreams of socialist utopia - Sbarro.
Now I have nothing against Sbarro, except that it is terrible. McDonald's, and to a slightly lesser extent, Burger King, one expects to see just about anywhere, especially places where the symbols of rabid consumerism and brand fetishism carry the extra weight of irony. When someday the golden arches rise above the Vatican, it will surprise me not a bit. After all, when one captures Iwo Jima, goes to the moon, or accomplishes some similar feat, it is right and proper to plant the flag, just as it might be expected that, having vanquished another foe, a gladiator would plant a heel squarely on the chest of his fallen victim while raising a fist in triumph. But after having only moments before turned away from the solemn war memorial, I couldn't help but think, 27 million dead, for Sbarro? That's difficult to swallow, no matter how you slice it.
Posted by Michael Hovnanian 4 comments:

Subway!?! No Way!
For me, the tour doesn't begin until the wheels hit the runaway, then I'm back on the clock. The warm, almost balmy Moscow air came as something of a surprise, although the fields still dotted with patches of snow made it seem as if this might have been a recent change in the weather. Still, it was much warmer here in Moscow than where I had come from - how many times do you get to say that?

Subway (the ubiquitous sandwich chain) wins the gold medal for the glaring first sign of 'our' triumph over socialism; It's right there in the Aeroexpress station beside Sheremetyevo Airport. McDonald’s and Starbucks were not behind for the silver and bronze. The half-hour train ride to the city center proved speedy, cheap (about $10) and efficient. Although we may have given them Subway, they are far ahead of us (at least our hometown) when it comes to actual subways, trains, and the like. It seems my colleagues, arriving a day earlier, had a less than optimal experience on buses stuck in Moscow traffic, which makes the train trip all the sweeter.

On account of the fine weather, I decided to walk to the Hotel from Belorusskaya station, about two miles. After about two blocks it was obvious pedestrians were moving much more quickly than the cars. A few odd glances from passers-by made me more than normally self-conscious until it occurred to me that my shirt, emblazoned with "Armenia Ice Hockey" might not have been the optimal choice. The Armenians have had some trouble with their neighbors, or so I hear. Discreetly, I put on another shirt. A few blocks down the road a persistent young scamp, street urchin of the classic mode, waved his cardboard sign in my face, asking for money (I believe) while feebly and ineptly trying to pick my pockets. I didn't feel truly relaxed until I passed through the metal detector into the secure bubble of the hotel lobby.
Posted by Michael Hovnanian No comments: