Seeing a noted soloist return as a conductor is not often cause for high hopes, whether the transformation occurs after age has taken its toll on the playing, or in mid career, ennui, or an inflated ego has inflamed the desire to conquer a higher musical mountain. Although but a few steps, the journey between the soloist's spot at the footlights and the podium is a perilous road which has buried many a neophyte beneath an avalanche of overwhelming details, thrown many an overeager yet unprepared dilettante down into a hidden crevasse, or left many a dabbler dawdling along the crisscrossing paths of interpretive uncertainty.

With these thoughts in the back of my mind, Nikolaj Znaider playing a Mozart concerto and conducting Symphonie fantastique on the Ravinia schedule looked like cause for concern. As if to confirm my worst fears, when greeting the orchestra, his Israeli-tinged accent immediately brought on a horrible, pit-of-the-stomach sinking feeling, flashbacks to our own local fin de siècle malaise. Fortunately, he quickly dispelled those awful feelings with his cheerful, warmhearted demeanor on the podium. After years of trying to figure out the relationship between our winter and summer managers, or if there is one at all – sometimes they seem to be thumbing their noses at each-other, at others, they seem to be ignoring each-other altogether – I've given up trying to figure things out like why we had just played the Berlioz about two weeks prior, during our annual week-long residency at a local arboretum. (The two concerts were about forty miles apart. I wonder if there is any overlap in audience.) Whatever the reason, I wouldn't say the musicians were on the edge of their seats, eager to play the piece again so soon. I might even say exactly the opposite was true. But against all odds Znaider succeeded in making it a more or less pleasant experience. Not the best performance we've ever given, but he did some nice things, and I find him very likeable.

(Non bassists should consider stopping at this point.)

From where the quarter notes begin, the first three bars aren't 'extensions', although that is certainly a possibility depending on string length and hand size, but rather 'pivots' (where the thumb doesn't move). The first real shift occurs between the 'g' and 'e' (where it says: 'shift').

The next several bars might become clearer with brackets showing the different 'positions', and, consequently, where the shifts occur.

In the following measure, the first finger remains in place (a-sharp = b-flat) and the thumb moves up one half-step. One bar later, it is the thumb which remains in place while the 1st and 2nd fingers move up a whole-step to set up another diminished triad. In the final two bars, the 'd' is closed with the thumb, then the hand pivots on the first finger and the thumb comes off the string so the harmonic may be touched with the 4th finger. As Berlioz might have said, voila!

For my taste, the 'small' or 'quick' little crescendos and diminuendos, such as occur throughout this any many other passages in Berlioz, can almost never be too exaggerated. Making these dramatic dynamic effects, which are often at odds with the meter, gives more of the lurid, frenzied, and in this case dreamlike character to the music.

The quarter-note passage appears in the part with four notes slurred. Splitting those slurs in half makes it easier to maximize the crescendos. This bowing is, I think, the 'industry standard'. I'm curious to hear from anyone who adheres to the printed slurs. 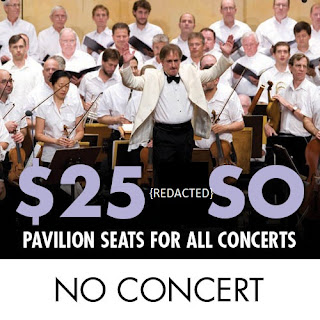 Since no summer of Bass Bloggery can go by without commentary on the season at Ravinia, it is time to take on the festival.
“What are you doing home on a Saturday night?” one of my neighbors who knows what I do for a living asked during a recent impromptu front porch gathering, calling attention to the fact that in years past the rigors of my profession often forced me to eschew the warm weather social scene on our block. Happily, I could inform my neighbor since the {redacted}SO would only have three Saturday performances all summer, my attendance at future gatherings would be more likely. Having been at something of a loss for words to describe this year's iteration of the festival, and also desiring to come across as a bit less judgey about our summer working conditions, I hit upon the notion that through numbers I might be able to describe the situation. Numbers, after all, being impartial arbiters of fact, don't lie. So here are a few numbers about the {redacted}SO summer season at Ravinia.
Number of weeks – 6
Total concerts – 16
Concerts conducted by Music Director – 5
Saturday concerts (see above) – 3
Sunday concerts – 4
Weekend concerts of classical music – 1.5 (One half point deduction for Gala all Tchaikovsky concert use of live canon)
Film nights – 4
Pops concerts – 2
Classical music concerts of orchestra without soloist(s) – 0
Rehearsals needed to put together film night Fantasia concert – 3
Rehearsals needed to record soundtrack with James Levine – 0 (I think we had 3 recording sessions...)
Performances of Star Spangled Banner – 2
Performances of works by Mozart – 3
Performances of works by Beethoven – 2 (not counting Fantasia)
Performances of works by Tchaikovsky – 2 (not counting Fantasia)
Performances of works by Elfman – 15
Performances of works by living composers (excluding pops or film nights) – 7 (OK, I'm joking: 0)
Total number of rehearsals – 34
Rehearsals per concert – 2.125
Concerts under conductors I have never heard of – 5
Perhaps I'm finally succumbing to Old Fart Syndrome (OFS), the main symptom of which is clinging to the belief that everything which occurred in the past is vastly superior to that which is happening now. Nevertheless, I seem to recall the {redacted}SO experience at Ravinia used to be something quite different from what it has become. We used to put on eight weeks of concerts, every Friday, Saturday, and Sunday from about the middle of June until the middle of August. A colleague pointed out that back in the day, the number of rehearsals per concert was more like 1.5. Three full rehearsals for Fantasia last week was cruel, but unfortunately not unusual punishment. I tried to find a schedule online from 1990, my first full summer at Ravinia but those pre-internet things aren't always so easy to find, so I gave up after a few clicks (another symptom of OFS is extreme impatience). A few tantalizing clues, along with a clouded memory leave me with the impression we opened with Mahler 2nd and later in the summer did Das Klagende Lied with guest conductor James Conlon. We also performed works by Milton Babbitt and Elliott Carter, of all people. A 'pops' concert back then was James Levine conducting Gershwin overtures as well as playing Rhapsody in Blue with the orchestra, which became a Deutsche Grammophon recording. The first three concerts of this season are Porgy and Bess, conducted by Bobby McFerrin, a film night mashup of the two Fantasia movies, and another film night of Danny Elfman's Tim Burton film scores. Sadly, even with the LoTR films behind us, it seems there is no escaping another summer dose of all things Efl-ish.
(Photo above taken from the Ravinia Festival Brochure – redaction by Bass Blog editorial staff.)