the tour in pictures

Rather than entertaining with poorly written prose, I decided to substitute poorly taken photographs instead.

Waiting for the bus. Time 6:30 AM Temperature 24 degrees (Fahrenheit).
So far this feels more like a beastly fishing trip than a tour. 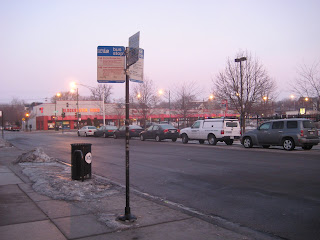 My attempt to avoid traveling with the orchestra backfired when I ended up on the same flight as Pierre Boulez. Fortunately, the Maestro kept the idle chitchat to a minimum. 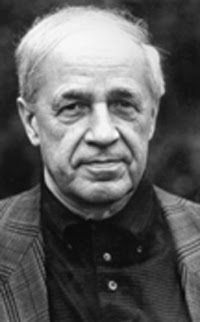 View from the N train to Manhattan. 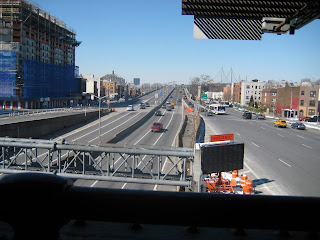 The red staircase. Carnegie Hall has poor facilities, including this long narrow stairwell for bassists to climb. It is only a matter of when I’m going to trip and fall down this stairway. 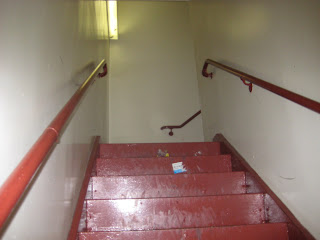 Access to the stage is only through one doorway, stage right. Below are some of my colleagues lugging instruments across to our position, stage left. 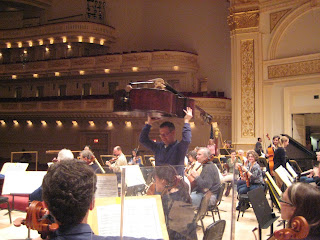 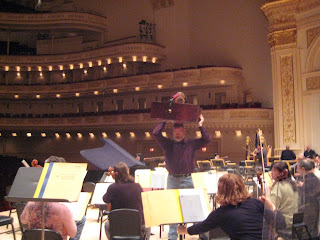 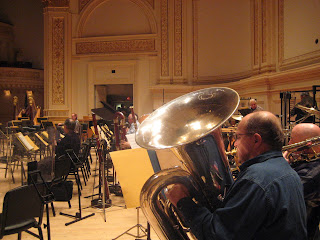 Tedious rehearsal of material we rehearsed and played all last week. 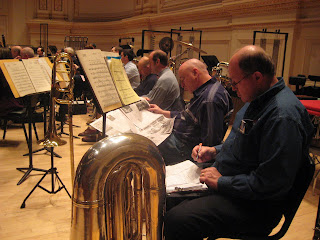 Waiting in the wings. 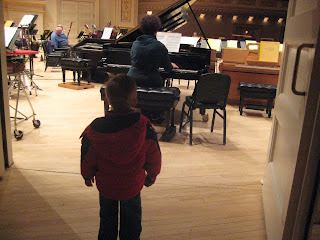 Last week’s concerts with Uchida playing Mozart were, for the most part, enjoyable. It is strange how playing with such a small subset of the group gives me concentrated doses of things I enjoy about being in the orchestra along with an equal measure of things I don’t… Anyhow, for a few brief moments last week I actually felt my function was something beyond acting as sound absorbent material for louder instruments.

This week, it feels like too much Pintscher and too little of everything else. More than half of the rehearsal time for the concert was spent on the one twenty-minute piece. As of the final rehearsal, Boulez’s Images were a few pixels short of focus. In un-Boulezian fashion, he ran out of time for Debussy at the end of the rehearsal due to too much time spent on Pintscher earlier. (I guess it didn’t help that the entire orchestra had to wait to begin rehearsal until an ‘indispensable’ musician sauntered in ten minutes late…) The Bartok also got short shrift.

The entire dog and pony show goes on the road to New York with concerts at Carnegie Hall on Monday and Tuesday. Due to pricey Internet access at our hotel, I may or may not be able to post anything while ‘on tour’ but I will keep a journal. Although the posts from our fall European jaunt received many positive reader comments it is safe to say that was the beginning of the end of my being able to say what orchestra I play for. To mangle a quote from the old Seinfeld show, like Icarus, I flew too close to the sun on wings of smoked salmon. Fortunately for everybody, breakfasts are not provided on domestic tours.
Posted by Michael Hovnanian No comments:

After a week off, back to the grind

The dreariest place to have lunch near our concert hall has to be the odd food court that boasts Hotdogs, a Subway, Popeye’s Chicken, and a Falafel place all under one roof. If this were a food blog I would steer readers to the falafel for sure and urge them to stay and soak up some of the ambience. The huge blue-glaring light fixtures that might have come out of a nearby parking garage bathe the place in an unholy light. Mismatched furniture is decidedly Reagan era McDonald’s vintage. To top it all off, the heating system is under performing on this frigid day, forcing most diners to eat in full winter regalia, giving the cavernous space a decidedly late Soviet Union feel. In spite of all that, the axis-of-evil food (falafel) makes it worth the short walk through the snow.

Uchida certainly brings a ray of sunshine into a dreary winter week. The best thing about her has to be that, unlike most podium poseurs, she doesn’t even pretend to be a conductor. She has an interesting way of leading rehearsals, flipping back forth through the score, singing the parts, answering questions or making general remarks in a soft, rapid voice. Sorry to say, we aren’t accustomed to paying constant close attention to what is coming from the podium. Uchida’s flighty, fluttery rehearsal technique suits her perfectly, but leaves the crossword playing, magazine reading, and chit chatting contingents of the orchestra often scratching their heads. She seems to be all about listening, which, if unusual for us, is a good thing. Still, it feels odd to play a Mozart piano concerto senza dogma.

The Divertimento for Strings will be rehearsed and performed without conductor, which should be interesting, to say the least.

Other highlights of the week include the CBE concert on Thursday as well as the Faure Requiem, Sunday. Every time I take a freelance gig, it turns out to be on the coldest, snowiest, hottest, rainiest, or otherwise most beastly week in recent memory. Maybe somebody is trying to tell me something. Always the optimist, I’m still looking forward to it.
Posted by Michael Hovnanian 4 comments:

The orchestra is playing Ainadamar by Osvaldo Golijov this week. Since the work only calls for 4 bassists and I am not one of them I can without reservation pronounce it a masterpiece. As is often the case when I have a week off, I came down with a nasty case of bronchitis, as if to serve me right.

Anyone interested in hearing my cough ravaged voice and orchestra ravaged bass playing can go to Jason Heath’s blog and check the current edition of his Contrabass Conversations podcast where he was gracious enough to interview The Chicago Bass Ensemble in advance of our concert next week. Fair warning to non-bassists; there is a little bit of a ‘bass geek’ quotient to this. The music clips are after the interview.

Info about the CBE concert can be found here.