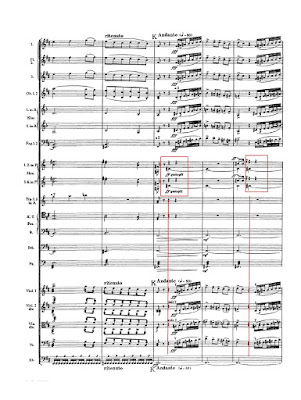 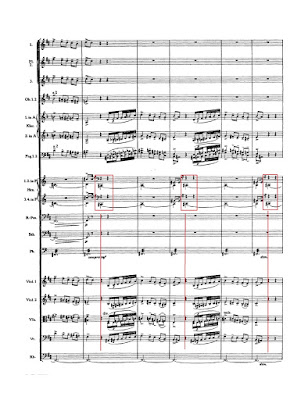 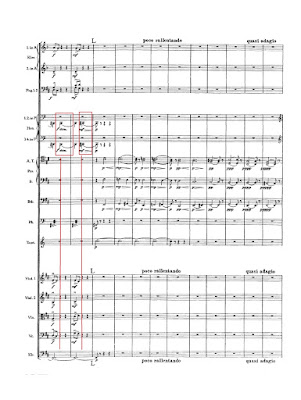 (click to embiggen the images)
Orchestra musicians exist in a milieu rich with traditions, some of which are ennobling, many of which are stultifying. One of my favorites, and not at all in the sarcastic sense, has to be the way our bass section plays the passage above, which occurs near the end of the Tchaikowsky 6th Symphony.
I've highlighted the 2nd and 4th horn parts, marked fortissimo and gestopft (stopped), which is that brassy, deliciously nasty sound produced by stuffing a hand into the bell. The arrows show the double bass part holding a low F-sharp (which sounds one octave below the written pitch). The first time I played the piece with the {redacted}SO, I was bemused to notice everyone else in the section changing bows during the long note in sync with the horns, perhaps even adding in a bit of sforzato (accent) for good measure. My stand partner, who had already been in the orchestra many years by that point, leaned over and sheepishly confessed that when he got in the orchestra, all of 'the old-timers' played that way, so he joined in and had continued to do so ever since.
Completely separate from the question of whether or not this is a good idea, I find myself thoroughly enjoying doing my part to maintain this unwritten tradition – the parts have never been so marked; and, in fact, 'institutionalizing' such a thing would most probably take all the fun out of it. Since, for whatever reason, our section tends to ideologically skew even more towards the bureaucratically minded than the orchestra as a whole, it is refreshing to see something unscripted see the light of day every now and again.
This week, we came as close as I've ever seen to a conductor acknowledging the practice, and perhaps even encouraging it. Manfred Honeck, filling in for the absent Music Director, had much to say about the Tchaikovsky 6th, too much, if an informal canvassing of colleagues is to be taken seriously. Arriving at the passage in question, he exhorted the horns to play the stopped note more loudly. Then, if I'm not mistaken, he turned slightly to the right and invited the trombones and tuba (who are holding a sustained F-sharp along with the basses) to help out, if they cared too. In the bass section there was a slight stirring among those who were still at that point A) awake, and B) paying attention, with the realization we might also be officially invited to join in, but alas, there was nary a mention of it directed toward us. As far as that passage goes, it's still don't ask, don't tell for now.
The many things performers do to interpret works, from the radical overhauling of the composer's intent, to the mundane, nuts and bolts adjustments needed to make even some of the greatest 'masterpieces' intelligible, makes an for some interesting pondering. I've often thought a novel form of protest, should performers ever need to resort to such a thing, might be a kind of 'work to rule', wherein we played exactly what was in the score and waited to see how long such a thing was tolerated by the listening public.
The sort of lazy literalism one can fall into as a performer was debunked one time in humorous fashion. The composer, Krzystof Penderecki was on the podium, conducting one of his works. (The Polish Requiem? Memory escapes me.) He wanted a certain musician to play something louder. Perhaps momentarily forgetting who was on the podium, the musician replied “But my part says mezzo-forte,” to which Penderecki replied, “But I am still alive!”
Posted by Michael Hovnanian 2 comments: