What would Bottesini do? 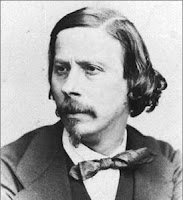 Out of the several editions of the famous passage for double basses from Verdi's Othello (Act IV), the one most interesting to me is the version that includes fingerings and bowings. Apparently, displeased by what he heard at the first go-round in Milan, probably during rehearsals for the premier at La Scala in 1887, Verdi sent a letter to Giovanni Bottesini in London, mentioning 'problematic' intonation in the double basses. Along with the letter, the composer included a copy of the passage with the request that the great virtuoso provide fingerings to guide the bassists in Milan toward fixing the intonation problem. Although I am not 100% certain of the provenance of the markings in the Ricordi edition, I have always assumed that they are what Bottesini provided to Verdi.

To the modern eye, at least to mine, some of the fingerings look odd, most notably the half-steps that are fingered 1 - 4.

Recently, while searching my computer for a copy of the Othello excerpt to give to a student, I rediscovered a scan of Bottesini's method book. Years ago, unsolicited, someone had sent me a CD containing scans of the whole book, an edition published by Carl Fischer, with the text in English. Unfortunately, there are no dates or information about the editor or translator, but it looks to be an old edition, with the archaic fingerings intact. The book is also available on IMSLP, Léon Escudier, editor, with the text in French. This version, in addition to an extended introductory section, also includes a second part that deals with the double bass as a solo instrument. I'm aware that a few modern, bowdlerized version of the book exist, where, in addition to the fingerings being 'updated', various passages were transposed or rewritten to utilize a fourth string, something Bottesini did not favor. With extra time on my hands lately, as is I'm sure true of anyone reading this contemporaneously, I thought it might be interesting to go through the book in order to try out Bottesini's fingerings, and, in so doing, discover if there is any method to what, at first glance appears as madness. My intention is to make note of my experiences here. The next number of posts will be dealing with that subject matter.

Before proceeding to the Bottesini Method, a few observations about the Othello passage might be of interest. There is some debate about the accent on the first note - specifically how loud to play that. At auditions, some players play it quite forcefully, others less so, or not at all. The score has no accent, last time I checked. The up-bow marking suggests to me that less of an attack might be the better approach. Perhaps the accent is there more to indicate that the note should have a definite beginning, rather than fading in from nothing. The indication of the 3rd string in m. 17 is almost certainly an error. The 1st string is more logical and fits with the numbered fingerings. I'm hoping that study of Bottesini's Method will shed some light on the fingering choices in measure 22 - the interval C-flat to B-flat is fingered one time 4 - 1 and the next 3 - 1.

An old post might be of interest. It is an account of when the {redacted}SO, under Sir Georg Solti, performed the piece, with Luciano Pavarotti in the title role. One minor episode not covered by the blog post concerns the marking soli contrabassi a 4 corde. The three string bass being still widely used at the time, Verdi felt the need to specify that only those with the low E string should play the first six measures, until tutti is marked in measure seven, probably to avoid having players join in in the middle of a phrase. At the first go through with Solti, it seemed like he had never noticed the marking before. There was some back and forth with the principal until the brain trust, such as it was, came to the (wrong!) conclusion that contrabassi a 4 corde meant four players. We were all set to proceed that way, with four players beginning, and the rest of the section joining at bar seven. Needles to say, this didn't sit well with some of us. It was one of a number of times over the years I thought the section might actually come to blows. At the time, I was using a five-string bass and wondered whether I should be a pill and, adhering to the letter of the law, sit out. In the end, hotter heads prevailed, and we all played the whole thing. 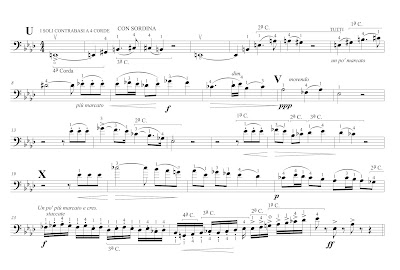