Joy to the World

an argument against happiness

A casual glance at an orchestra in performance usually reveals a group of mostly phlegmatic individuals going about their business. To the untrained eye, stoicism appears to be the order of the day, but the astute observer can mark a variety of attitudes and emotions among the musicians. During a single concert it is often possible to observe everything from rapture to despair, disguised either cleverly, or not at all. Even when the general mood of the ensemble is good and spirits are mostly high, it is almost always possible to find at least one individual who is scowling or otherwise showing signs of being under a dark cloud. Conversely, when spirits are generally low, there is always someone who seems to be happily playing away, either oblivious to, or immune from the general malaise around them.

One entertaining pastime to consider during an otherwise un-engaging performance is to look for the player onstage who seems to be enjoying themselves most of all and then to seek out their counterpart, the one who is suffering. This is easier than it seems at first for, interestingly, these individuals are often seated right next to each other. Having observed this phenomenon over a number of years, I've struggled to determine if this antipodal relationship is causal or correlative. Is this a coincidence? Is it Schadenfreude - a happy individual taking pleasure in the low spirits of another? Or is it something else? Why do individuals in close proximity exhibit such discordant emotional responses to the same performance?

In my experience, the overly happy player is more often than not at least partially oblivious to their surroundings, and therefore probably incapable of experiencing Schadenfreude. On the other hand, the unhappy individual, possessed of a keener sense of discrimination, possibly sharpened by years of discontentment, is more acutely aware, sometimes painfully so, of what is going on around them. Maybe this boils down to something like the bumper stickers you see occasionally that say “If you're not outraged, you're not paying attention.”

For a while I postulated that there might be a limited supply of happiness available during any performance, and the happy player had siphoned off more than their fair share - the “I drink your milkshake” theory. But later on I began to wonder if that viewpoint might have been overly simplistic. The supply of happiness is most probably variable; happiness can be created or destroyed. But is the creation of happiness equivalent to the destruction of unhappiness? This got me to wondering if the happy player, through the reckless enactment of their enjoyment, might actually be creating unhappiness in those around them.

The subject got rolling around in my mind again when I recently came across the term Gluckschmerz, a made up word with a mysterious etymology. Gluckschmerz, while not its exact opposite, is a good complement to Schadenfreude. My small understanding of these two terms is that they both have something to do with a sense of justice and with group dynamics, which make them both apt for talking about the orchestra. More than simply the enjoyment gained from witnessing someone else's suffering, Schadenfreude is the feeling of satisfaction that arises from knowing justice is being done when a transgressor receives their well-deserved comeuppance. Likewise, beyond being suffering caused by the joy of another, Gluckschmerz is the unhappiness felt upon witnessing someone deriving pleasure from something that is ill-gotten, illegitimate, or otherwise undeserved. When an acerbic conductor calls out a certain musician, players may experience Schadenfreude if they feel the criticism to be merited. When the criticism is not forthcoming they might feel disappointment, which, when the undeserving player then gambols and frolics through a concert in an unaware and unconscious state of bliss, curdles and becomes Gluckschmerz.

On the one hand, there is something profoundly depressing when considering how joy and misery are sometimes dependently linked. I can imagine Messrs. Schadenfreude and Gluckschmerz as two grizzled old timers, long time stand partners at the back of a string section in some godforsaken orchestra. Like two petulant children on opposite ends of a teeter-totter, one can only go up when the other comes down; they are hateful of, yet dependent upon the other. Conversely, there is cause for optimism, for as we are especially reminded during the holiday season, we are, all of us, sinners. As such, when we fall, as we all do, inevitably, we might be able to take solace in the fact we might be generating happiness, at least somewhere. At any rate, this dark underbelly to happiness is something to keep in mind over the next few weeks.

Now that I've gone ahead and redacted myself from the {redacted}SO, I intend to begin blogging again, although the subject matter will probably be substantially different than before. But more on retirement will be forthcoming later. The pressing concern of the moment is a concert by The Growlers: A Double Bass Ensemble, exactly one week from today. Details are below.

I'm very happy to be performing Logs, by Paul Chihara on this concert. It has been a favorite of mine since college days, way back in the late 1970s. Most notable to me is Chihara's use of the 'circular bowing' technique, which produces a very earthy, organic kind of sound, evoking feelings of being deep within a quiet, ancient forest, sensing that trees are truly alive. The inspiration for the piece apparently came from Zen breathing exercises in The Art of Archery. Our performance of Logs will use six double basses, spread out as much as space will allow, hopefully giving the audience the sensation of being surrounded by old trees. Indeed, what is a double bass, if not an old log fashioned into something else? 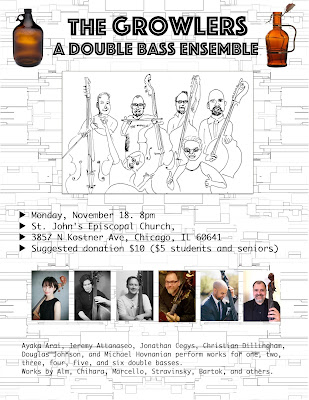