Farrago by the Lake

When playing with a 'period' instrument group, or otherwise engaging in 'historically informed performance practice' (an earnest if clunky description), one often encounters parts (AKA sheet music) full of very specific markings - dots, dashes, hairpins, and whatnot - added by the conductor, concertmaster, or leader. Of course almost all the parts we play from in the [redacted]SO are marked up in some way, but the 'early music' parts are generally brought in by guest artists, showing their own, sometimes very specific ideas about phrasing and articulation, while the parts brought up from the orchestra library might have layer upon layer of often contradictory markings from previous performances. A good case in point is the part to the Franck Symphony in D minor I'm reading from this week, which is full of non vibrato and other penciled markings that have nothing to do with what Maestro Muti seems to want. From my experience, as a general rule the 'early music' parts tend to have more phrasings marked into them (rather than simply bowings), and those phrasings are more fastidiously unified.
There are often different, sometimes diametrically opposed ideas about phrasing certain passages, and people of good will might not hold the same opinions about them. Unfortunately, in the modern orchestra, rehearsal time is often in shorter supply than good will (depending on what instrument one plays), so one might imagine the practice of placing numerous specific markings in the instrumental parts would have caught on at some point. Yet, the 'period' performer and his set of pre-marked parts is often the subject of scorn, as somehow against spontaneity or expressiveness. The leader who resorts to pencil, or worse yet, language, to convey his intent is regarded as ineffectual, weak, or simply a total bore. The miserable kapellmeister, wire-rimmed spectacles sliding down his nose, pencil clutched in grimy fingerless gloves, who sits by a sputtering wood stove and scratches a mean-spirited diminuendo into twenty violin parts doesn't stand a chance in the world of the reigning maestro, resplendent in tails, hair blown back by the orchestral fortissimo, the dashing hero who can tame a hundred roaring musicians with a simple flick of his baton.
The problem with making conductorial convulsions the source of all musical inspiration is that they are often vague. The other night, my stand partner asked what I thought about the Maestro 'glaring' at us during a certain passage. I thought he had been smiling at that point, and so had aimed my toothiest grin back in the direction of the podium. Needless to say, after the performance I departed the concert hall more quickly than usual, just in case. Paradoxically, much of a conductor's strength comes from that vagueness, in that it binds the musicians more closely to him - the source of confusion simultaneously its only solution. This is something I've been thinking a lot about recently, and will hopefully return to at some point.
However, all of the preceding serves only as a rather long winded introduction to a description of a performance I took part in a number of years ago. To briefly set the scene: Beethoven 4th piano concerto 3rd movement, Rondo, Vivace; conductor, not remembered (someone highly regarded...); soloist (ditto). There is a passage in this movement (m. 57 if you want to look it up in the score) where the piano and orchestra trade one measure of music back and forth, not much more than a chord progression really, one of those fragments, in his genius, Beethoven takes apart and reassembles with ease. The 'melody', if any, is in the left hand of the piano, the violas, cellos and basses in the orchestra.

During the rehearsals, nothing was said about this small section of the piece - no time to look in detail at such a small corner, really. In performance, the conductor (not a bad one, if I recall) gave us a cue of much vigor, but weak in its informational content as to how as a player one ought to channel that energy and convert it into phrasing. In my immediate vicinity I heard the following renditions of the passage. 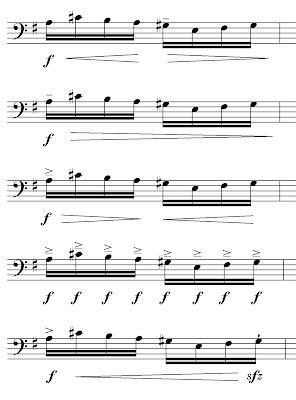 From my position in the orchestra, I think it is not possible to determine how these interpretations combined in the ears of any particular audience member, if they were more, or less effective than a unified approach might have been, if for instance one of those phrasings had been marked into the parts and more or less followed by every musician. It is possible each and every performer whose interpretations I have notated above walked away from the concert I am recalling with the belief they phrased the passage well, perhaps even as the composer or conductor had wished it done, while all of their individual intentions were blended into the amalgamation reaching the audience, which actually resembled no single one of them. At times it feels as if there is a degree of inefficiency built into such a system, where a certain amount of one's effort is 'wasted', merely serving to counteract its antipode somewhere else on the stage, but perhaps that is the 'price' of freedom.
Posted by Michael Hovnanian 4 comments: