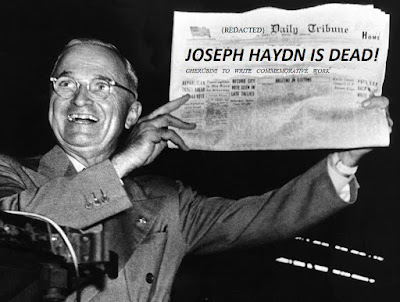 Billing the concerts last week as the Season Finale suggested we might be entering the realm of Alternate Facts, since many knew the ensemble was scheduled to return for four more performances. The season would really end with the orchestra accompanying a week-long run of Star Wars: Episode IV – A New Hope, yet another of the film night performances sneaking across the boarder between classical and popular music to infest our schedule. Cherubini, Chant sur la mort du Joseph Haydn was an interesting choice in this era of Fake News; the work was composed in reaction to a (failing?) London publication's erroneous report that the revered composer had died. Having survived in spite of Cherubini's request that all copies be destroyed once he learned the error upon which it was based, the star-crossed composition was given an interesting performance here on Saturday evening. About seven measures into the quiet introduction, in response to an inadvertent noise from the stage, the Maestro stopped the performance, turned and excoriated the audience for the disruption. Breaking the fourth wall is often an invitation for the least inhibited among us to open up their own particular jar of crazy, and so, true to form, in the uncomfortable silence following the Maestro's remarks somebody yelled out something, a few people clapped, a few more tittered, none of which did anything but make the atmosphere more tense. With all hope of quickly putting a minor disturbance behind us gone, we started again from the beginning.

There were many theories put forth by musicians to try and explain what had happened. Perhaps the Maestro reacted to some audience members' spontaneous expressions of surprise over the onstage noise, which also had a visual component. Maybe the quick assignation of blame to the audience was a show of solidarity with musicians. The only constant was the poor reporting in the press, beginning of course with the premature pronouncement of Haydn's death, and continuing with both local papers writing up the incident as a concert halted due to 'coughing', a misrepresentation parroted by one of the more popular classical music blogs.

Humans, on either side of the proscenium, occasionally make unintended noises. With training and concentrated focus on the task at hand, most musicians are able to block out whatever the audience is doing, even when it is startling, like someone talking loudly, falling ill, or even a fistfight breaking out in the box seats (the so-called Brawl at the Hall). Unexpected surprises from the stage can be harder to ignore, since (ostensibly) we are paying close attention to each other. Where force of concentration is insufficient, the professional code of conduct keeps most musicians focused on their own tasks when faced with anything from a broken string or dropped mute to someone vomiting onstage (yes, that happened). Lacking the training, not bound by a professional code of conduct, and probably not concentrating as deeply, audience members can be forgiven for spontaneous reactions to something startling or unusual.

Coughs, on the other hand, are often symptoms of a bored or uninvolved audience. A disinterested group of people tends to cough and fidget more. Sometimes the very same audience that coughed a lot during one part of a performance will become riveted later on, and much more quiet. Concerts with superstar performers tend to draw audiences that contain more people who are not really there to hear the music, so these crowds often contain more people who are disengaged from the performance, inattentive, and noisy. But, no matter who is performing, audience behavior is a reflection on what is happening on stage. Becoming irritated with an audience is like yelling at the wind. Asking people not to cough is like telling someone not to think of a pink elephant and then getting upset when they do.

When I asked an acquaintance why he was having so much trouble committing to acquiring a new cat, even though it was something he repeatedly expressed a strong desire to do, he replied that, as a man ‘of a certain age’, he fully expected that, even if it didn’t outlive him, his next cat would be his last.  In that frame of mind, he certainly didn’t want to rush into such an important decision and eventually ended up agonizing over it for more than a year.  When our music director’s contract was extended until 2022, as a musician ‘of a certain age’, I realized that either he or his replacement would be my last.  Fortunately for me, as a rank and file player, I won’t have a lot of agonizing to do, but the decision isn’t entirely without consequences. And the arrival of a new maestro is an interesting time to be in an orchestra - sort of a chance for the dispassionate observer to play Jane Goodall minus a trek through the jungle - certainly an experience to savor one last time.

Esa-Pekka Salonen came to town a few weeks ago, conducting some heavyweight repertoire - Mahler 9 and Verklärte Nacht were the mainstays - which might indicate somebody in the organization has their eye on him as music director material.  I like Salonen for the post, both as a conductor and composer, but also for a more insidious reason.  As the arrival of the current music director prompted a number musicians to take up the study of Italian, I wonder if a new era might see a similar interest in the Finnish language emerge. Unfortunately, the US State Department Foreign Service Institute lists Finnish among the group of languages most difficult for English speakers to learn. According to the FSI, in order to become conversant, a student of Finnish might expect to put in about 44 weeks, or 1100 hours of study. I think it would be very interesting to see if any of my colleagues would take up the challenge. Coincidentally, since Finnish is related to Hungarian, and both are from outside of the Indo-European family, there is a certain pleasing symmetry to the idea I might end my career just as it began, under the baton of a maestro speaking one of the Uralic languages.

****
The Bass Blog now has a Facebook page.  Nothing much to see there at the moment, but hopefully that will change in time.
Posted by Michael Hovnanian 2 comments: