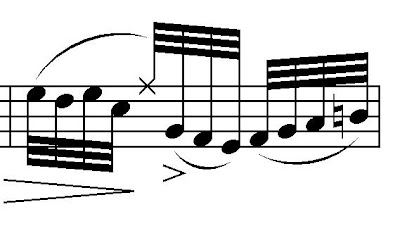 The Abbado/Brendel program is only played twice. I’m not sure why film night was stuck into a week with a very popular program. Beethoven 5 – if that doesn’t sell, we may as well fold up the whole operation. And in fact the concert Thursday evening was well attended. Perhaps there is a good explanation why Abbado and Brendel will be cooling their heels back at the hotel (I don’t expect them to be at film night) instead of repeating the concert on Friday.

Abbado had interesting approaches to the Beethoven and Haydn symphonies. The orchestra was reduced in size – only 4 basses on the Beethoven, three on the Haydn, and two on the Mozart. He arrived with parts marked with all of his phrasing ideas, some of which were ambiguous. His brisk tempos were along the lines of an original instrument performance. Anything different from the way we ordinarily do things always elicits howls from some of the more small-minded member of the orchestra, so the response to Abbado was nothing unexpected. Some players complained he was hard to follow, but I found him no more or less clear than what we usually see.

The biggest surprise he pulled off was wearing the traditional white tie and tails – almost never seen on the podium these days anymore. Conductor apparel has become a rogues gallery of Neru jackets, priestly robes, or other unidentifiable garb. It was a pleasant surprise seeing something that didn’t produce titters and rolled eyes from the orchestra and audience when he appeared on stage for the concert.

Brendel was his usual superlative self. I am a big fan of his refined understated style. Always a pleasure to hear a real pro do his thing.
Posted by Michael Hovnanian No comments:

Sorry about the lack of posts recently. Some non-music things have been eating up all of my free time lately. On top of that, my laptop crashed last week. Among the many things lost was a post on the Alpine Symphony. The quick synopsis of that is the piece is a masterwork, but I despise it. The parts were a mess and poorly bowed. Not much new there…

Recently, a colleague pronounced my blog 'uninteresting'. Maybe he used the word 'boring'.
So, in the interest of spicing things up, I include here the Gloria from the Schubert Mass MOB played last week. I actually did get the music before the first rehearsal but totally guessed wrong on the tempo and didn’t practice this movement. The marking of Maestoso e vivace was misleading – much more of the latter than the former.

This makes a good etude, I think. The tempo marking is about what we played. The fingerings are what I pulled out of my – well, hat – when scrambling through it at the first rehearsal. 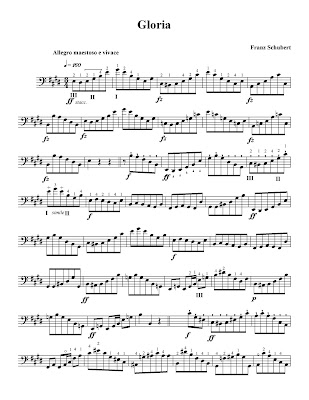 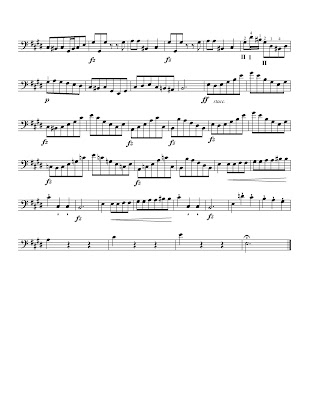