In addition to the folly that is trying to play anything of musical value on the double bass, this movement added the extra layer of trying to play imitative counterpoint on instruments with different tunings, which meant I had to learn the same passages in two different keys and then try and make them sound the same. Every plan has its flaws, I suppose, although doing a little extra work certainly didn't kill me, and this is a pretty cool movement, so maybe worth the effort.

Please forgive the lengthy gap between the 2nd and 3rd movements of this Sonata. I really needed a vacation.

The 3rd movement, Largo, a simple affair at first glance, with almost nothing to it, nonetheless gave me some food for thought. Largo should be faster than the first movement, Adagio, or so I have read, but what to make of the long note values? Just looking at something written all in minims make me want to play it slowly, perhaps out of nothing more than some sort of 'received musical wisdom'. Also, the simplicity of this movement left it wide open to all sorts of ornamentation. But when it came time to play it, I just couldn't do it. Maybe the fact the orchestra was playing Mahler 9th that week and I was desperately longing for something understated to play had a role in my decision to jettison all ornaments.

Since, in my experience, few things a have proved more malevolent than the musician with political aspirations, my heart sank when I discovered that in addition to his musical career, Benedetto Marcello practiced law and served on the venerable council of forty in the city-state of Venice, before becoming regional governor at Pola, Istria. Saving his reputation, in my estimation at least, is the fact that after a few years he retired to Brescia. The claim his health had been 'impaired' by the climate if Istria, which I think of as a kind of idyllic Adriatic resort destination, might indicate some dissatisfaction with political life, or at least the modesty to acknowledge the Venetian Republic could continue to function without him in office. Further evidence Marcello might not have suffered from taking himself too seriously is the satirical pamphlet Il teatro alla moda (The Fashionable Theater), a scathing commentary on the state of Italian Opera in his day.

The 2nd movement of this sonata all but did me in. At some point, I decided I had to take a fast tempo – fast enough to be considered Allegro even for a normal-sized instrument. The section below probably needs a few more decades of practice. The lightning bolts show the parts that gave me the most trouble. Harmonically, Marcello throws in a bit of a curve ball here as well, the Neapolitan 6th chord. I don't know how many theory lectures I slept through (why are they always at 8 AM?) to get to the point where I could actually spot one of those. 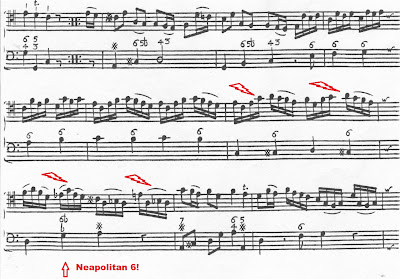 The bass blog will now go on holiday for a couple weeks. Expect the rest of this sonata and the others to follow.

Sorry to disappoint anyone who might have hoped I quit after two sonatas (there are six in this set). This is a busy time of year, musically, so it has been difficult finding time to get time in the room where I'm making these recordings, not to mention practicing. As it was, the amount of noises, interruptions, and distractions during the recording of this sonata became almost unbearable. Numerous takes were ruined by people barging in “Uh...sorry..” and slamming the door on their way out. Someone seemed to be joy-riding in the freight elevator, and then a radio started up in the next room. On top of that, I discovered the continuo player had not adequately prepared his part, so after recording the solo line, I decided to fold up my tent and come back another day.

A few people expressed disbelief at my assertion that it is often very difficult to hear oneself while playing in the orchestra. During the rehearsals for Mahler 9 this week, during the cacophonous Rondo-Burleske movement, I realized my D-string had slipped one whole tone below pitch. The thing is, I have have no idea how many lines (pages) I'd played after it happened and before I noticed. How about that?

I read somewhere that in the Baroque period, Adagio was a slower tempo than Largo. That little tidbit of information, whether true or not, has given me some guidance in choosing tempos for the slow movements. The rolled chord on the first and last notes of this movement was not written by Marcello, but cadged from a recording of the piece as played by a cellist.