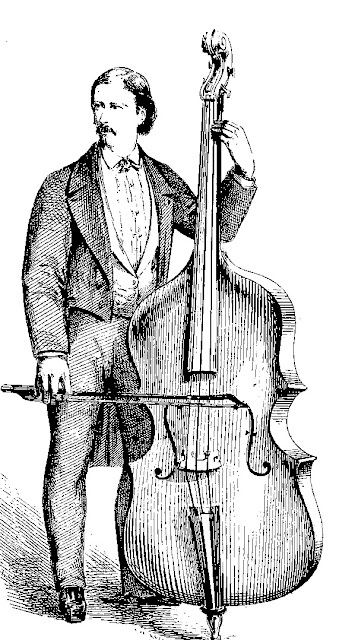 Discarding every trifling disputation, I have followed but one threefold guide in the composition of this method: Truth for science. Beauty for art. Usefulness for the pupil.

Bottesini introduces his Method with a few eloquent remarks, laying out the practical foundation of his approach and modestly asserting that, rather than arising from a burning desire to edify the bass playing world, it was only the prompting of others that caused him to create the work. The author's modesty is not merely surprising, emanating as it does from Bottesini, the bassist and composer who bestrode the musical world of the 19th century like a colossus, it also jars the modern sensibility, inured as we are to the scourge of monetization and naked self-promotion that has seeped into every corner of our cultural experience, penetrating even to the out-of-the-way nooks and crannies of the musical world where bassists dwell. The great virtuoso only reluctantly endeavored to write his Method when begged to do so. And, furthermore, he eschewed the golden opportunity to hawk something, a special end-pin, personally endorsed bows or basses, perhaps an exclusive Bottesini Brand® rosin in a special monogrammed stay-fresh case, or maybe a bib for the bass, quivers for the bow, how about a summer camp, or an infallible secret to audition success. The great Bottesini, virtuous in every sense, renounces commercialization, turns his back on the snake oil and rubbish that litters so much of the modern pedagogical landscape.

Within the modest tone of the prologue, Bottesini makes clear that, while respecting the viewpoints of others, he reserves the right to express his own. He begins with an impassioned argument for the three-stringed bass. In adding an extra string, he argues, what is gained by enabling a few lower notes is negated by the loss of sound and clarity of tone. As he describes his experiments in adding a fourth string to various fine instruments: The result was always the same, and always bad... Neither is he in favor of tuning the bass in fifths, which he deems 'absurd'.

As mentioned in the previous post, the English language edition I'm using is published by Carl Fischer. The Escudier edition, in addition to some very handsome illustrations not found in the English version, has some slightly different material in the introductory section. For instance, here, Bottesini takes aim at the so-called Dragonetti Bow. Cette position, on le voit, manque d'élégance. (This position, as we can see, lacks elegance.) Zing!

Written descriptions of bow grips are often vague and unhelpful. Admitting this from the outset, Bottesini limits himself to a few instructions.

The hand not too near the nut, nor too far from it, the middle finger, the third finger, and the little finger firmly placed against the nut in such a way that the middle finger adapts itself to the place where the hair commences; the forefinger must hook upon the stick and press it strongly; the thumb on the side of the nut and always opposite the middle finger, pressing from the right side and a little obliquely, the edge of the groove in the nut.

Most surprising to me is that this description does not seem to match what I have long understood to be the so-called Italian bow grip, where the thumb is positioned in the little c-shaped part of the frog and does not touch the stick at all. (I've seen this part of the bow called the 'throat', which sounds gross when you think about the Italian bow grip as sticking one's thumb in the throat of the bow.) The illustrations seem to bear this out. 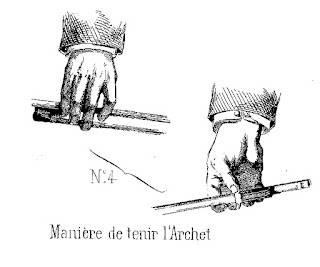 Although neither of the editions in my possession have dates of publication, my guess is that the Method was a later work, written after Bottesini had already achieved his fame as a bassist. In support of this, I note how he mentions that others approached and persuaded him to create it, presumably on account of his reputation. I also sense a degree of world-weariness in his remarks. The fatalism in his attitude toward the instrument and its students suggests a long travail and the attendant disappointment inevitably experienced by all who play the instrument over a period of many years.

Bottesini's views on the double bass, particularly concerning it as a solo instrument, might come as a surprise to some, particularly to those in the Academy, and his realistic assessment of the prospects of the majority of students who might take up the instrument flies in the face of our present day practice of maintaining persistent, if sometimes irrational, optimism.

The Double Bass cannot aspire to the advantages of other solo instruments... The sole end and purpose of the Double Bass ought, then, to be giving of the fundamental notes to the orchestra.

Let us make no mistake on this subject; you do not learn to play the Double Bass for the purpose of executing brilliant morceaux with purity of tone, elegance of coloring, and lightness of bow. If uncommon talent, seconded by rare gifts and long studies can attain exceptional results, such attainments are not generally acquired.

Ouch! with that, it's time to start learning the Double Bass. The following posts will delve deeper into the Method.