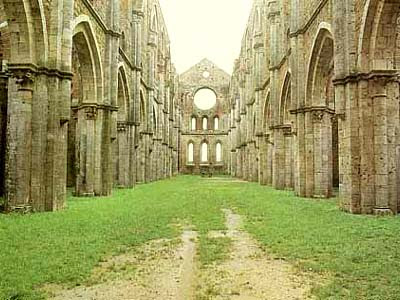 You could almost hear the vacuum seal of the airlock, the giant sucking sound as the glass door swung closed behind you. Here in the funeral parlor, music no more than a whisper. Mahler, Montiverdi, neither louder than acolytes, distant in their underground catacombs, chanting some grievous loss. A cymbal crash, barely audible – Wagner is dead. The lonely clerk looks over the top of half-rimmed glasses, eyes following you warily from behind a back issue of Audiophile Magazine. The CD cases rattle like bones as you flip them one by one – the moribund, the dead, the forgotten dead.
Posted by Michael Hovnanian

Fantastic post. This is why I love your blog.

I never thought of Jarvi as stiff. He is a big guy who is light on his feet, like a great heavyweight boxer (On that subject, there seems to be a rather long scar on his head, from almost his eyebrow to back behind his receded hairline...I have often speculated on how he came to acquire it.) He had a stroke some years back, I believe, and he has perhaps lost some of his extraordinary technique, but he is still better at his craft than almost anybody else. He is a gentleman and an adult, and a pleasure to play under. He has a wonderful natural style. One thing that he can do better than just about anybody is move the music forward, in an utterly natural almost imperceptible accelerando. It is a scandal that he has never moved higher than Music Director of Detroit while pygmies who can't carry his jockstrap have presided over Cleveland, New York, and Philadelphia.

A very nice tribute to an underrated conductor! Järvi conducting a certain Midwestern orchestra in the final minutes of Franz Schmidt's Second Symphony is one of the most exciting things in my record collection. The Chandos recording style really allows you to "hear the room," experience it as if you were there; nothing artificial.

Max, you are right, stiff isn't the proper word - probably something more like deadpan.

Next time he's in town let's take him out for a drink and get his thoughts on the ASOL.

Yup, Chandos is still alive and kicking after a fashion, per this link. In fact, you may get a kick out of their "Disc of the Month", Sergei Taneyev's Suite de Concert, with Neeme Jarvi and the Royal Scottish National Orchestra. But then conductor, orchestra and label go back in history quite a way, to when Jarvi was principal conductor at the RSNO.

Alex, your comment on the Schmidt reminds me of one of my favorite Jarvi moments. We were just coming back from a tour when we took on the Schmidt, we were jet lagged and almost nobody had had a chance to look at it much. This was unfortunate, because Schmidt's Second Symphony makes extraordinary technical demands on every musician in the orchestra. The first run through was a catastrophe--we were all falling by the wayside like Napoleon's troops headed home from Moscow. After finishing the first movement, Jarvi got that little amused glint in his eye you see from him sometimes, tapped the stand with his baton, and said, "Now once more--with nuance!" We pulled it together for the recording, but there was a lot of frantic practicing in midwestern homes that week.

Michael: Great to have you back. Your always amusing and insightful discussions of orchestra life are always quite enjoyable.

This is probably old news to the bass community by now, but I found this on YouTube last week and I have quite enjoyed it. To be honest I'm not sure if I've ever seen the bass played quite like this.

Hovnanian wrote: ". . . it struck me that my chosen profession is based almost entirely on obsessive infatuation with an idealized, unrecoverable past."

I say a worthy pursuit indeed!

Lovely posting and comment thread! And where did the beautiful photo come from?

I wondered if anyone would be curious about the image of the abandoned Cistercian abbey of San Galgano and its relation to the title of the post. The Russian filmmaker Andrei Tarkovsky used the abandoned church in a very striking scene in his film ‘Nostalgia’. The image haunted me for years, so much so I once dragged my family halfway across Italy to see it.

I was haunted for many years by photos of Glastonbury Abbey, and finally visited in 1993 on a day trip from Bath. I would like to go back; I didn't have nearly enough time there and the day ended with me spraining my ankle quite badly.

I am going to put "Nostalgia" on my Netflix queue, and perhaps I will visit San Galgano on my next trip to Italy, because I can tell that the photo is going to haunt me.

Ah, I see George - who has cross-referenced us - got there before me. You cite more fascinating chapter and verse as a player, but I agree with it all - and, as you'll see, my own nostalgia for Jarvi is very strong. We had not only Taneyev but also Kalinnikov - now that Jurowski's Tchaikovskyfest is over, I'd put that performance alongside Iolanta and Manfred as the greatest (and certainly the most revelatory we've had of a work I'd never previously thought of as first-rate).

Rozhdestvensky closed the festival on Friday. He did some masterly things, but was too laid back. Jarvi's love of most things he does bubbles away under the surface. Thank you for this!

Ah, so that's San Galgano. I was willingly dragged there many years ago by Sienese friends who wanted me to see 'Italy's premier flautist' Severino Gazelloni in concert. I'd never heard of him then - to horrified cries of, 'what, you don't know our great Gazelloni?'. Nor do I remember what was played. But the setting was, of course, beautiful.