The Copland 3rd contains some wonderful music. Unfortunately at our performances it is bracketed by some of the most punishing fortissimos I have heard in a long while. Seemingly no punches were pulled in the musical beat-down we gave that poor defenseless symphony.

There is a gentleman (and I’m being generous) who attends Thursday evening concerts (but maybe it’s Friday – I’m trying to put the whole thing behind me). This patron of the arts lets out what sound suspiciously like lusty ‘boos!’ when the brass section gets their bows at the end of the concert. But there is some debate about this. Colleagues maintain it is actually some sort of animalistic noise of approval, but who knows. The sounds are sufficiently ambiguous – besides the almost universal judgment they are weird – one might take them for either praise or excoriation depending on ones predisposition. Since I have not yet managed to identify this loyal subscriber, I have formed two conflicting mental images of how he might appear: either the silver-haired esthete, disgustedly screwing in his monocle and gathering his coat while venting his displeasure at the musical excesses he has endured, or some crew-cut student (of the trombone?) the letters ‘C’ ‘S’ ‘O’ in grease paint across his bare chest, howling his approval of those selfsame excesses.

Since I am off the Ravel (only 6 basses) I am left with only the McPhee to discuss. Admittedly, I was prepared to hate the piece but am finding myself peculiarly disarmed. McPhee has a skimpy article in the Wikipedia, but it gives a tantalizing glimpse of a composer who charted a unique and very interesting course. Perhaps I shall break with longstanding tradition and read the program notes for once. Not having done that, I will leave it to say only that Tabuh-tabuhan seems to be based on Balinese music, which to my ear sounds very much like Okinawan music. Long story, but I have become something of a fan of Okinawan music over the past few years.

Here are a couple of the Indonesian scales I hear in the piece: 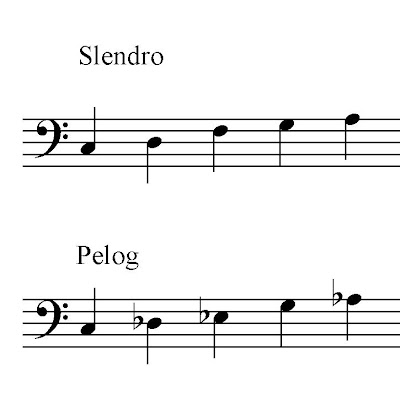 Before any ethnomusicologists jump down my throat for inaccuracies in this post, I have to confess that although I went to a college (Cal-Arts) that boasted both Javanese and Balinese Gamelans, I did not devote myself adequately to the study of that music. To my continuing impoverishment, I spent those years practicing the double bass.
Posted by Michael Hovnanian

I discovered Okinawan music after Balinese music (I played in a Balinese gamelan for 10 years), and the one similarity that did jump out at me was the scales. A large number of the Okinawan songs I've heard take the pelog scale and shoehorn it into a Western context (Ab major in the tuning of your example). Balinese music, in contrast, doesn't really have any sense of harmony at all; almost all the simultanieties are unisons or octaves.

I have a recording of Tabuh-Tabuhan that I remember enjoying, though I don't remember much else about it.

By all accounts McPhee was a pretty cool guy.

Hey Michael,
I keep thinking it's a primal grunt of approval, since I cannot imagine continuing to pay money to hear something you hate. Kind of like living next to the El tracks; either you deal (and in some cases, I suppose, kind of get off on it), or get the heck away from it.
On the other hand, remember in the last few years the guy who came and always booed Barenboims concerts? It was important for this individual to tell the world how the last couple hours of his life had been ruined.
I actually love the occasional "BOO"; the idea that somebody really gives a damn about the music, and gets mad when the art is being ill-served. However, the current offender is starting to bug me, mainly because I can't seem to spot him, though he seems to reside in the terrace (or as I call them, the back patio seats).
Should we offer a reward for live capture?

When I played the Spoleto festival the Italians used to boo the tenor every night. I think word got out that he wasn’t any good and people relished the opportunity – maybe they came mainly to do that. When I had a night off I went to the opera just to boo. I’ve never had more fun at the opera!

BTW, I remember once when we (the basses) were sitting behind the 1st violins it sounded like the boobird was directly behind us.

Yes, I think the offender sits on the stage right side of the patio.
I'll keep my eyes open, but I'm reminded of the story of the dog chasing the car: what does it do when it get ahold of it?

I arrived at your blog serendipitously via a former Seattle Youth Symphony orchestral-mate, Marko Velikonja, who played clarinet one year with you in that ensemble and whose brother Pete was your high-school classmate. Marko and I are former classmates and alumni of the Fletcher School of Law and Diplomacy in Boston. I'm here to dispel the myth and your misunderstanding of that boisterous subscriber in the Terrace of Symphony Center on Thursday nights--that subscriber is me. To give you credit, you got 75% percent of the facts right but 100% of the interpretation of those facts wrong. I'm here to educate you and your blog readers what is actually going on in my interior experience of your Thursday performances. Let me first debunk the myths surrounding my identity.

Yes, thank you for your comments about my alleged but barely attainable gentlemanliness. I do happen to have an international Ivy League liberal arts and musical education at that. I come from an artistic family. My great uncle was an Oscar-winning Hollywood and Emmy-winning Broadway actor. My Uncle was a dentist turned stage actor who received many an accolade on the Arena Theatre stage in Washington DC. My father was a jazz and classical pianist and currently a musical salonista (think Alma Mahler) in his spare time. I myself am classically trained trombonist (:-))) who have been exposed to Brahms, Chopin, Mahler, Lizst, Mozart, and Wagner since birth having heard my father play every night downstairs. My subsequent trombone teachers included Joe Alessi of the NY Phil, Doug Yeo of the Boston Symphony, Glenn Dodson of the Philadelphia Orchestra, Frank Crisafulli of the CSO and Siegfried Cieslik of the Berlin Philharmonic. I graduated from the Interlochen Arts Academy, spent four summers at the Tanglewood Music Festival, where I worked directly with Leonard Bernstein, received a full scholarship to Julliard, and have experienced live, in-performance all the world's greatest orchestras and (living) maestros...several times over. In college, I chose not to pursue a musical career but continue to patronize the arts around the world. Enough said--my musical pedigree is sterling.

If you have studied romance languages, you will know that nouns and interjections have masculine, feminine, neuter and plural forms. Take the case of the Italian interjection bravo. This interjection, which used in a performance (arts, sports) context to indicate a job well done comes in three flavors...bravo (m), brava (f) and bravi(pl). My alleged 'boos' are actually heavily accentuated bravis, which according to the definition, means that I am approving the performance, not denigrating it, as you surmised. The use of such interjections is standard practice in South America, Asia, and Europe, especially Germany and Italy, used less so in New York, and rarely in Chicago...what a pity! I recommend that you visit the Arena di Verona, the Hamburg Opera or the Bolshoi Opera if you want to experience really stentorian interjections, i.e. either boos or bravos. I happened to live Berlin for two years in the 90s, visited all the major European music festivals then, and really internalized this tradition. Actually, I was educated in this type of applause a decade earlier in New York, as a frequent visitor to the MET Opera. In any case, I have always considered this and other types of emotionally-inspired, dramatic gestures of audience approval or disdain contextually appropriate, urbane and genteel. (Just to set the record straight--I have yet to utter a boo on this continent.) I might add that this post-concert behavior is gaining more traction in Chicago, as more internationally-educated audiences are in attendance. I happen to be the un-elected bravo-chorus-master in Chicago at the moment, and yes, did utter fortissimo bravis at the following performances : Dudamel's Mahler 1st, Baremboim's Brucker 9th and Parsifal 3rd Act, Tilson Thomas' Mahler 2nd, Gilbert's Copland 3rd (for the brass only), and Bychkov's Alpine Symphony.

You might suppose that I am quite liberal in my positive interjections, i.e. bravo/brava/bravi utterances. This is hardly the case. If the CSO gives a mediocre, average, or even above average performance, you won't be hearing anything but a dainty clap out of me. Only superior shows like Dudamel's Mahler 1st or Baremboim's Brucker 9th deserve this level of emotional approbation. These affirmations--transparent in their diction (take out your ear-plugs please!), wide-spread in their use, and appropriate in context--are not only reserved for the brass section. On the contrary, I utter them for any members or sections of the orchestra that deserve audible affirmation for that particular performance. Calling them 'weird' suggests a shockingly parochial attitude--I apologize for ruffling your feathers in advance--and I suggest that you (and any of your CSO colleagues who are equally baffled) visit some music festivals overseas, e.g. Bayreuth, Salzburg, Verona, not as CSO performers but as audience members. This will give you a totally different perspective on what it means to be emotionally and spiritually connected to the music-making experience--as an audience member. Reflect upon why you became a classical musician years ago? Regrettably, very few CSO concert-goers, as your former Maestro once articulated, are at the level of consciousness to even fathom what this (kind of artistic experience) means. Those who are, will comprehend and defend these interjections, such venting of pleasure or displeasure, as totally rational, fitting, and affectionate behavior. Don't forget, we patrons are paying your salaries and so we reserve the right to articulate our 'performance reviews' publically.

PS: I do have a gothic CSO and a art-deco Berlin Phil tatoo affixed my left and right buttocks, respectively! :-)

PSS: Remember, there is a cavernous sonic and connotational gap between a boo and a bravi...

I think I deserve extra credit for hitting the trombonist thing on the head.

Wow, that guys comment is just about as bad as you can get. Can anyone say "ostentatious"?