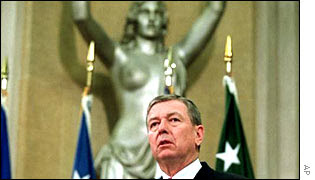 Vienna
Travel from Luzern to Vienna, uneventful. The Musikverein is the same old place, which is what is nice about it. Some of the end pin holes in the stage look like they might be a hundred and fifty years old, the kind of tradition you can put your foot on. The hall has a fantastic resonance that, if we aren't careful, we can fill with a fantastic jumble of sound. At rehearsals Haitink asked us repeatedly not to (surprise) overplay. Performing Bruckner in the Musikverein feels very appropriate somehow, although I can't say I came away from the concert liking Bruckner or understanding what he was up to any better. But if you put a pig in mud I suppose he's happy even if he can't tell you why.
There is a story floating around that Bruckner, a shy and possibly troubled man, asked that the bare breasted caryatids in the Musikverein be covered. I have no idea if this actually occurred (the request and/or the covering) but I think of it whenever I play there.
We performed both programs (Mozart/Shostakovich, Haydn/Bruckner) in Vienna with a day off in between which I used to pay homage to another reviled, discredited, and dare I say misunderstood, historical figure. I spent a few pleasant hours at the all but deserted Arnold Schoenberg Institute – well worth the € 5 price of admission IMHO.
The dingy blockhouse that is Vienna's Hütteldorf train station left a lot to be desired. The decrepit waiting room reminded me of places I'd seen in the old Soviet Union – uncomfortable seats, peeling paint, bright, crackling fluorescent lights. All in all not the kind of place to spend the time between concert and midnight train. At the last minute the track for our train changed and we all lurched and jostled our way through a grimy, fetid passageway before emerging onto the correct platform – like a scene out of Dr. Zhivago, perhaps 1984, I thought. Wondering if the little dis-utopian scene I found myself caught in, the nightmare vision of a Europe that might have been, could possibly be some sort of penance for my foolish beliefs, I promised to make no more visits to Marx Engels statue. Just then the station loudspeakers began playing Pierrot Lunaire.
Posted by Michael Hovnanian