The last chair bassist of a major orchestra fancied himself something of an amateur conductor. One day the Maestro fell ill and with no conductor on call the orchestra manager approached the bassist to fill in. So the bassist led rehearsals and concerts, receiving accolades from both the public and the critics for his performances. The following week the Maestro returned to the podium. When the bassist took his usual seat at the back of the section his stand partner turned to him and asked, “Where the hell were you last week?”

Sorry to repeat an old joke probably every orchestra musician knows. Of course I originally heard this as a viola joke but for the purpose of this blog I took the liberty of modifying it. The point being that although the posts concerning conductors or artistic issues tend to generate a lot of interest, most of what goes into playing double bass in an orchestra is much less glamorous, concerning little more than trying to play the notes right in front of one’s nose.

To that end, here are a few passages from the Brahms 1st. Movement 1, letter ‘E’ is probably the most frequently requested excerpt from this symphony at orchestra auditions. Chung’s parts had the hooked bowings shown here in the first 8 bars to force us to play sostenuto. I think it is possible to play sustained notes with separate bows and also get a little more sound, but this bowing keeps anyone from getting lazy about the sustain. 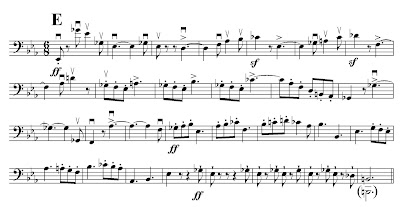 The next two excerpts probably wouldn’t show up at the top of any audition list, but they can be tricky just the same.

I have included the 8vb (octave transpositions) we used for the concerts last week. These are fairly standard, although the low ‘B’ in the first movement isn’t requested too often. The whole question of when to use the transpositions in Brahms is probably worthy of a blog all its own, or somebody’s doctoral dissertation.
Posted by Michael Hovnanian

Hi Michael, no need for a dissertation on low notes in Brahms symphonies because Brahms himself transcribed his four symphonies for 4 hand piano, and all the nice low notes we have always done out of common sense, or lack thereof, ARE THERE! low Bs and all. As a matter of fact, the opening of the first symphony does a left hand divisi with low C eighth notes and a dotted half note contra C pedal!! Here is a link to all the pdf copies of all 4 symphonies transcribed by the master himself https://urresearch.rochester.edu/institutionalPublicationPublicView.action?institutionalItemId=6722