My wife may well have the second movement of Sonata no. 1 in her nightmares. I found this movement particularly difficult to master and spent many hours actually practicing it, to the point where it almost ceased to exist as a piece of music and became simply a way to torture myself with daily reminders of my shortcomings.

This might be a good time to describe some of the equipment I'm using for this project. To make my life a bit more difficult, I decided to use two different instruments, with different tunings, to record the solo and continuo parts. The 'solo' instrument is tuned to more or less standard 'solo tuning' while the continuo uses the common tuning used most often in the orchestra. 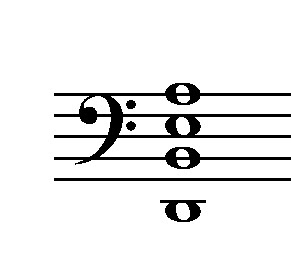 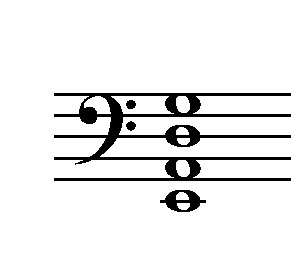 The odd tuning of the 4th string in solo tuning only serves the function of eliminating a 'wolf note' on the top string, by sympathetic resonance with the second partial of the lower string. In this sonata, there are no notes on the 4th string anyway. In sonata no. 2, the alternate tuning actually made my life more miserable (as you will hear in due course).

A few words of clarification about tunings and transpositions might be helpful at the outset. The double bass is a transposing instrument. When you give a bass player a part that reads 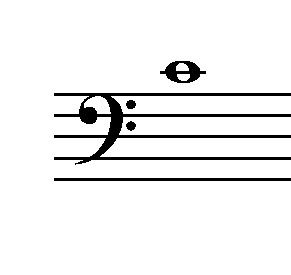 the sound you get back will be 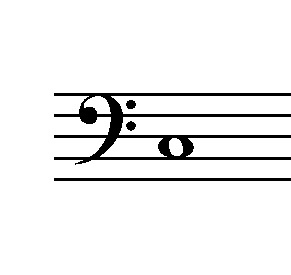 When bassists complain about having to 'transpose' something, take it with a grain of salt – they've been doing it their whole lives! [Don't even get me started on harmonics. There are hours and hours of my life I will never get back, wasted trying to figure out what register a composer wanted a harmonic to sound in. Composers: forget about markings like 'real sound', 'at pitch', '8va', '8vb' and all the instructions about what string and in which position to find the note. Write the harmonic like the rest of the bass part, one octave above where you want it to sound. Any decent player will be able to figure out where to play it...]

The examples of the tunings cited above actually sound one octave lower. In addition, parts written for solo tuning are transposed down another whole step, making for a 'D' transposition (which simply means when a player plays a 'C' it sounds like 'D') To avoid confusion, hereafter, any musical examples cited will be at concert pitch (which is the pitch and in the octave in which they sound). When I publish my arrangements of these sonatas, I will of course make the necessary transpositions so bassists everywhere can play them without (believing they are) transposing.


Some time during the process of practicing these sonatas, I had the bright idea of using a baroque bow. I'm a bit leery disclosing this, because where I work, 'period instruments' might be even more despised than modern music. Never the less, I endeavored to learn to use the baroque bow, and eventually came to love it. Mastering the grip took quite a while before I was comfortable holding the stick in my fingertips without squeezing. Much of the challenge playing these sonatas has been trying to avoid the tendency for the bass to sound lugubrious. For me, using the baroque bow has been entirely worth the effort in the lightness and clarity of the sound it produces. 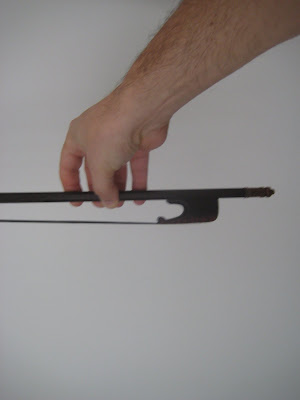 which will immediately remind a lot of bassists of similar passages in the Mozart, Symphony no. 40. I imagine any bass player with an orchestra job has spent a few hours cutting their teeth on those cross-string passages. At first, after picking up the baroque bow, I became dismayed at the prospect of having to relearn the technique. In the long run, things I learned using the baroque bow paid off on the 'modern' bow as well.

I'm really enjoying this project of yours: very beautiful and thoughtful playing.

Found your thoughts on the Baroque bow insructive as well. About 30 years ago Rafael Druian conducted a chamber orchestra size version of my orchestra here in some barouque pieces and at one point had all the string players "choke up" on the bow several inches like we were a finesse hitter trying to punch a ball through the infield. It made quite an impact on me and I still do it in small groups when playing Vivaldi or especially Corelli. Not a bad substitute, if you don't have a Baroque bow handy, I think.

I'm trying to understand the combination of the solo tuning plus the whole-step transposition. Is the deal simply that you read the part as if your strings were C-A-D-G (same as orchestra tuning, with the E dropped to a C) but your strings have been tuned up a whole step?

Usually the parts are transposed, so for the Sonata in F, the player would read from a part in E flat. With the strings up a step it sounds in F.

I read everything at concert pitch and do the transposition in my head. It has saved me a lot of time over the years, not having to rewrite things.