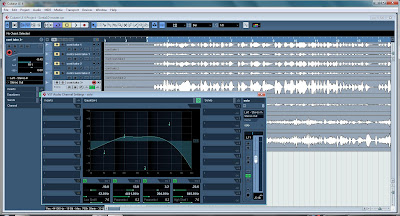 A few people asked about the equipment used to make these recordings. When I began, I was an absolute novice at recording and used stuff I had accumulated over the years, an odd assortment of mismatched components that included a microphone that cost more than one of the basses, an audio interface that ultimately proved effective at nothing more than keeping my studio door from swinging open, all 'controlled' by a laptop computer so old, rather than by mouse or keyboard, input was by cuneiform tablet, the 'battery', in reality, a grumpy little hamster, running endlessly in a tiny wheel.

So, I'm recording everything on my laptop (I did get a newer one) running Cubase software that came with the Lexicon 'Omega' interface which, before wasting hours of my time, ended up as a doorstop. The “Omega' was replaced by a Presonus 'Firebox', which has run smoothly from the get-go. Close micing of the bass is with a Neumann U47 (which is a story in itself), the room mics were a pair of Neumann K 84s, lent me by a very generous friend, which, after the failure of the Lexicon 'Omega' to even function as a stereo pre-amp, was reduced to to one.

The initial idea was to record in my studio at home. That way, I could record a take whenever the spirit moved me. To record in a small room, I had to place the microphone close to the instrument, about six inches off the bridge, in order to avoid getting nasty reflections from the room. A friend who knows a thing or two about recording came over, took one look at my setup, and told me there was no way I could get a decent sound in that space. So, I've been lugging my instrument(s) and all the gear to 'an undisclosed location' and making the recordings there. Even in the larger room, I still like the sound of the close mic placement, where some of the bow noise is audible. Recordings that are too 'smoothed out' sound fake to my ears and makes me sort of sleepy listening to them.

Editing the finished recordings consisted of mixing the signals from the close and room mics. In the future, I might try moving the close mic a bit farther away. It seems like the farther away from my bass you get, the better it sounds. My family, on the west coast, think my playing is quite good, while my wife, sitting in the next room, is not so impressed. The attached picture shows some of the EQ settings I've experimented with: rolling off the high frequencies to get rid of hiss, the lows, to eliminate rumble.

Of the four movements, this is the one I'm most happy about the recording I ended up with. Right near the beginning, you might be able to hear a very audible gasp for breath, and I'll be darned if I didn't do it again on the repeat as well. Eliminating all sort of noises made while playing, groans, sighs, gasps, and whatnot is actually another element I had to work hard on. Believe it or not, it was much worse before. Never the less, there is nothing quite so pathetic as a middle-aged bassist sweating and gasping over a piece of junior-high level music, but there you have it.