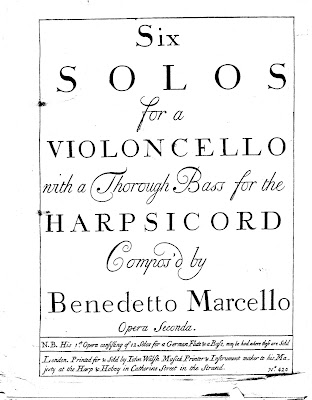 The Marcello Sonatas have been in the double bass repertoire for quite a while. I'm not sure when the first transcriptions were published, or if all six of the sonatas in this set (opus 2) are available, but I have come across no.s 2, 3, and 6, fairly regularly in the repertoire of junior high and high-school students.

When I began this project, I worked from one of the widely available editions for bass already in my library. After practicing for a while, I remember showing my part to Sonata no.2 to a harpsichordist, who, holding the paper in hand as if it were a wet piece of tissue, informed me there was something 'very wrong' with it before scolding me for not either, 1) finding a better edition, or 2) consulting a more original source. I'm not sure '1' exists (for double bass, at least), and so I went to step '2' and resolved to make my own edition based on an original source.

Slurs, articulations, and dynamics are usually the most suspicious elements when dealing with a modern edition of a baroque piece. Some of the changes are simply an editor trying to bring a measure of consistency to the variations of an old, sometimes hard to read, handwritten manuscript from the 18th century. On top of that, editors sometimes feel the need to 'modernize' the music, adding slurs and articulations that, while common today, were not in use at the time. Beyond that, often dynamics and phrasings, largely absent in original sources, have been added as an aid to the modern performer, perhaps unfamiliar with the style. Another complicating factor is when, as in this case, the piece is also being transcribed for a different instrument, and there are numerous editorial decisions about what is idiomatic.

The edition I am working from for these recordings, and the one upon which I will base my arrangement for bass, to be published at the conclusion of this project, is the London, c. 1732 edition, available in facsimile form. (The title page is above) The edition, while highly legible, seems to contain what at first glance by the modern eye look like numerous inconsistencies and small errors (although there is what appears to be a rather egregious error in the second measure of the first Sonata – see below). As I have had it explained to me by various authorities, the markings (or lack thereof) which may appear curious to our modern eyes have various explanations, from the shaky hand of an underpaid copyist, to the notion that everyone (at that time) would know the correct way to play the music, obviating the need for comprehensive instructions to the performer, and so on. The main thing I've taken away from my investigations into the matter, is not to jump to any sort of conclusion, and it is not always the best idea to impose a false consistency. There will be more to say on the subject, I'm sure, as the project progresses.

My recording of the first movement of Sonata no.2 contains a couple of willful departures from the manuscript that deserve explanation. The first is the addition of the small cadenza in the thirteenth measure. I have no idea if this is the sort of thing that would have been done at the time, or if what I have done is even remotely passable as stylistically acceptable. Chalk that up to rebelliousness, or call it an ornament that got way out of hand. The smaller digression, but the one that provides me with an immense amount of glee, is the low 'B' played as the penultimate note in the continuo. Of course, the cello does not go down to a low 'B' and Marcello wrote no such note. However, since there are so few things the bass can do that the cello cannot, and playing notes below the 16 foot 'C' is one of them, and in many passages with similar figuration, the bass line drops down an octave at just such a place, I decided to be unfaithful at this point.

There is also a more sinister reason for throwing in a note out of the range of the cello, which is the source of my enjoyment. In the course of my career, I have learned much of what I know about baroque music from the fine cellists, bassoonists and keyboardists with whom I have shared continuo duties. With these noble people, I have no quibble. However, there is a certain species of cellist, often found dominating the continuo, towards which I have a degree of animus. I'm speaking of those who have perfected the art of the over-the-shoulder scowl, the barked admonition, the affected air of superiority, those who make unilateral changes in the part and play without once giving thought that there are others playing the same line along with them. To those bad actors, I dedicate this one low note, as a kind of 'up yours' gesture on behalf of any and all bassists who have suffered.

I fiddled around and tried some different EQ setting for this movement, a bit darker, I think.